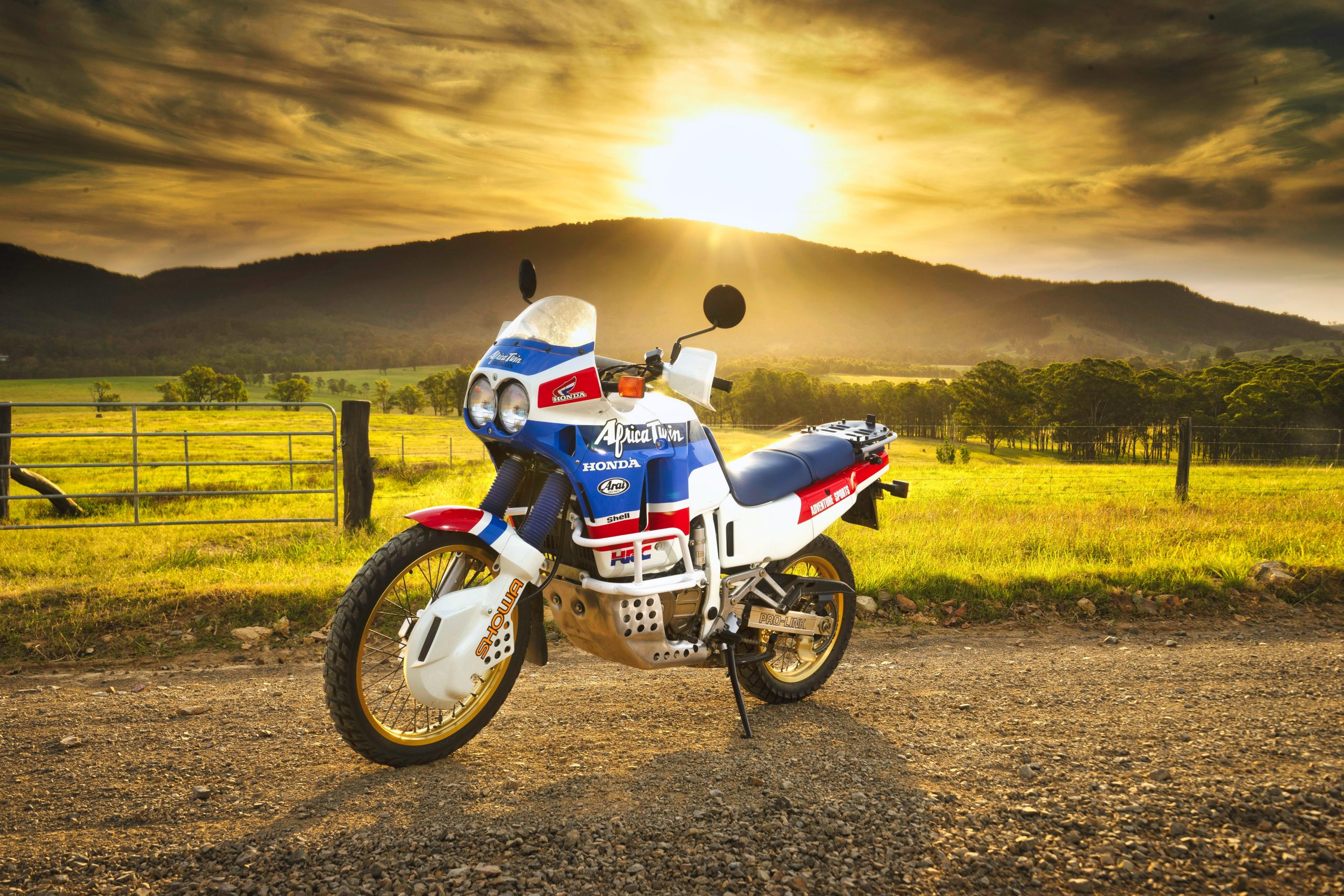 The Honda Africa twin is a classic and deserves to be. It changed not only the way we ride but our expectations of what can be gained in seeing the world on a motorcycle.

Before we get into this stunning 1988 Africa Twin, I have to come clean. Honda and I haven’t always seen eye to eye. This was not the fault of any individual who worked for Honda, more a head office decision to punish me for being rude about a CR125. Or more likely, to punish me for something Scott Bishop said about it and that I subsequently published in DIRT ACTION magazine.

Scotty tested motocross bikes for me. He was without doubt the best tester in the country, and more sharply barbed than anyone when it came to ridiculing flawed motocross bikes. I don’t remember his exact words in this instance, but after testing it, Scott inferred that the then current CR125 couldn’t turn around even in a space shuttle garage. Or maybe it was inside the Sydney Showground, I can’t remember. (It was the MCG and it was true. The 1988 CR125 was now famously, a terrible bike – Damo)

Whatever he said, Honda didn’t like it. It hurt their pride. A lot, which is understandable. But funny as it might seem in what is now an over-sanitised world, Scott Bishop and I had a lot of fun being what you might call rude. He got me into a lot of trouble but his observations always made a point relevant to those who purchased dirt bikes. They also made people laugh and they sold magazines. I could have yanked the chain on some of his witticisms but that would have robbed us of a talented rider and humourist at a time when the Sanitation Department was mowing them down.

We didn’t get many Hondas after head office dropped the anchor on my head, matter of fact we didn’t get any, but I don’t bear a grudge. Some of my friends still work at Honda and still speak to me. They seem to have forgotten what we said eons ago about that bike, even how bad it actually was.

The truth is, Honda doesn’t make many bad motorcycles, and even if I were inclined to hold a grudge, I’d have to admit that the 1988 Honda Africa Twin is not only one of the most significant evolutionary steps in the history of motorcycles but one of the best looking of all time (a BLOAT).

With this machine, Honda basically invented the long-distance dirt tourer, the adventure bike, and did it with such style that the original Africa Twin is still regarded as an object desirable for its own sake. This bike changed the course of motorcycling. It also started an on-going craze, but more than that, it encouraged many who would never buy a large motorcycle, or any motorcycle, to go and get one and explore the country with like-minded individuals. Dare we say it, the Africa Twin and the bikes that followed gave these people a new life, as the phenomenon of adventure riding has done for thousands more.

You can buy a new Africa Twin (with Apple CarPlay™ and Android Auto compatible, whatever that is) or you can try to find one of the original models, as former civil engineer Andy Hoddle did, though in his case, not without a lot of messy to-ing and fro-ing.

I’ll spare you the details of what he went through to get this $5000 motorcycle from Japan to Australia. It cost more to get it here than to buy it. But that was a mere distraction. As we all know, whether it’s a new guitar, a fancy watch or a motorcycle, if the attraction is powerful enough, no advice to the contrary will have any effect, even if the bike in question is 30 years old and has already clocked 45,000 kays with some other joker in the saddle.

Anyway, this XRV650 RD03 of Andy’s was made in Hamamatsu in 1988. It was based on the highly successful NXR750 works rally bike that Honda built to win the Dakar. The two bikes looked similar but even with bright graphics the NXR had the meaner and slightly demented look common to all race bikes. I find this veneer covering naked aggression very attractive in any bike. I don’t know why. It may be a personality disorder but to me, nothing looks more demented than a Moto GP bike stripped to its underpants.

In 1988 the 230kg Africa Twin was the first of its type and back then no-one knew what to do with it. “What the hell is this bloody thing?” seemed to be the general opinion, but while riders were working that out, Honda kept fiddling with it. Even stripped to its undies the bike was a thing of beauty but in 1990 the company replaced it with 742cc version, (the XRV750 RD04), and over the next two years added a larger windscreen, more powerful headlights and a multi-function digital trip meter.

By the time all this stuff arrived, riders who had wondered what the hell they were supposed to do with The Behemoth were putting it to good use all over Europe (or everywhere but Austria that is, where no-one can ride anything off-road unless it’s a police vehicle chasing an infected anti-vaxxer.)

With its 25-litre fuel tank the Africa Twin had a decent range so you could well and truly get off the bitumen. If you and the luscious Marianne could learn how to put up a tent you could actually go-bush. Going bush in Europe usually means camping where the nearest falafel is only 30 minutes away by horse and cart. Still, riders were finally seeing what Honda had in mind when they built this jigger and that was the important thing. You could hear their collective “Aha!” from the surface of the moon.

Some of the current adventure bikes – better make that all of them – cost more than any car I’ve ever owned, but that doesn’t deter those with money from investing in one of these beasts and enjoying the adventure bike life, often in truly remote areas where self-sufficiency is a priority and having lots of money doesn’t really mean anything.

Andy Hoddle is realistic about the big girl. He says she “isn’t what you’d call fast” but for a bike that was built 30 years ago, it feels modern, with excellent bakes and a smooth ride. He still tells everyone his XRV is the best of the breed. He’s biased, I admit.