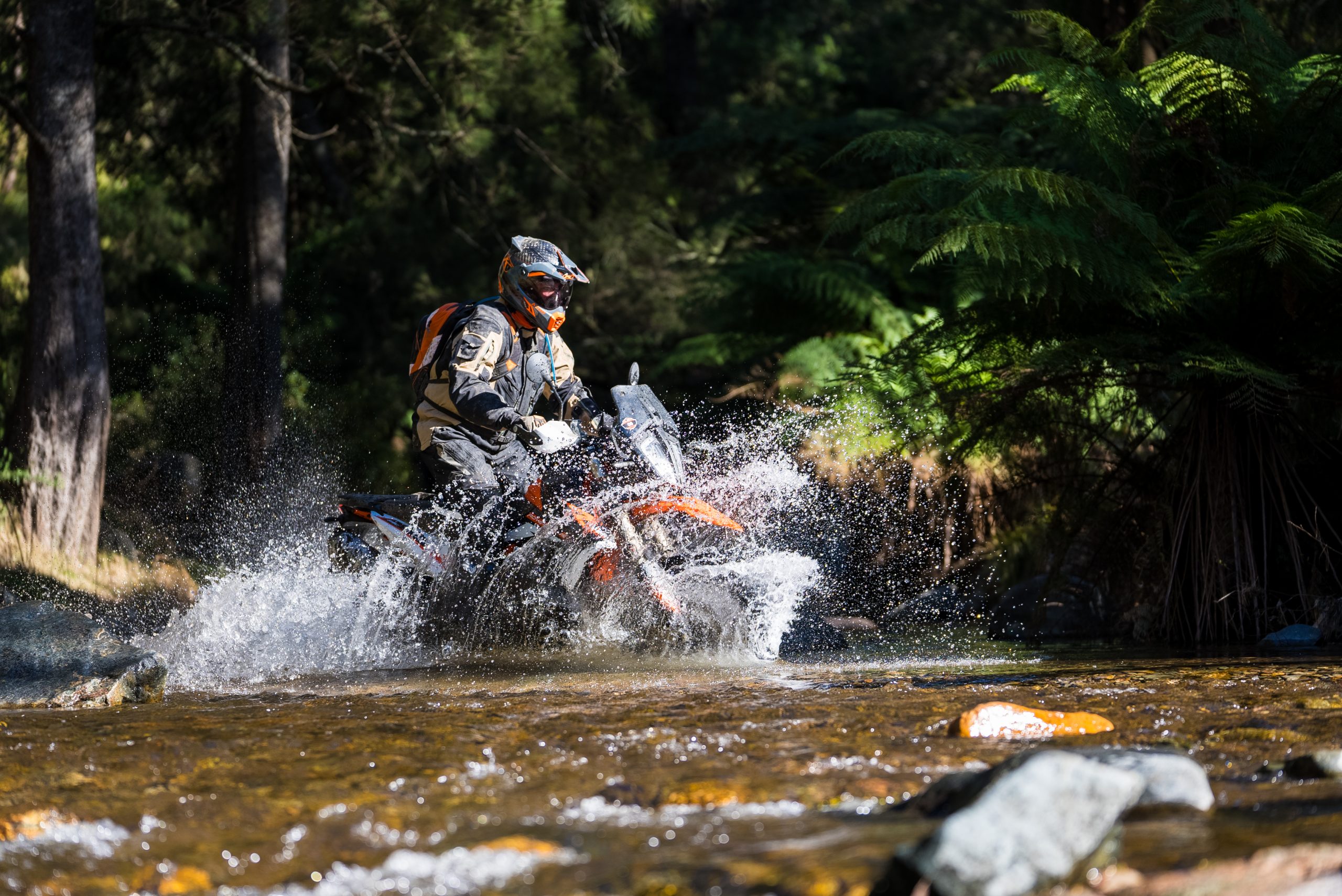 A moment of silence please, for we have lost a good one. Gone too soon but never forgotten, the 790 Adventure R was short-lived but burned brightly, fuelled by an epic marketing spend and heaped praise. It is a sad farewell for a bike that rewrote the expectations of a modern adventure bike and injected an amount of enduro prowess never seen before in a production machine. In terms of a melding of enduro, rally, adventure and electronics, there was nothing like the 790 before the 790.

KTM has replaced the 790 Adventure R with the 890 Adventure R, an increase in capacity that we’ve seen frequently to meet Euro 5 emissions laws which will soon force mice to wear nappies lest their cheesy farts pollute the atmosphere and wipe out the human race. The extra 90cc brings with it claimed figures of 105 hp @ 8,000rpm and 100 Nm @ 6,500 rpm at a dry weight of 196kg.

Numbers are fun. I use them to count how many dark chocolate liquorice bullets I can eat in one sitting – the tally is impressive! And these are good numbers, but they only tell a fraction of the story. I’m going to split this review in two with the ride experience right here and the deeper tech stuff in another post with the help of KTM Australia’s tech guru, Rob Twyerould – click here

The Australian media launch of the 890 was across three days and set amongst the amazing trails of the Blue Mountains, just a few hours away from KTM’s headquarters in Sydney. It seems you could ride for years and never see the same track twice in this vast area.

Bushwalkers go missing with regular monotony and no doubt there are mysterious creatures lurking about yet to be discovered. Maybe Harold Holt is in there somewhere…nothing would surprise me. That’s painting a rather dark picture of a beautiful landscape though. The good news is that the tracks are amazing, and in some sections, they range from quite the challenge to not even the threat of a cattle prodding would entice me to take on that.

We rode minimal hard-top and maximum dirt across the three days and thanks to some quality route scouting we saw a lot of different terrains that certainly at times upped the technical track rating.

The 890 feels familiar because it is mostly familiar (Pulitzer Prize on its way for that sentence). It has changed substantially but the changes aren’t immediately obvious because they’re internal, so the bike looks and feels pretty much like it always has.

There are three versions of the 890 available in the more road-going Adventure, the dirt happy Adventure R and the fully kitted out Adventure R Rally which will be available in limited numbers and is highlighted by the WP Pro suspension package which I’ve found to be ridiculously impressive.

Disappointingly, the Adventure R is now missing a slice of the electronics package that was a drawcard of the 790. Rally Mode is no longer standard but instead, it’s an optional extra. KTM expects most buyers will opt for the ‘Tech Pack,’ which returns Rally Mode and includes Cruise Control, Quickshifter + (clutchless up/downshifting) and Motor Slip Regulation (prevents rear wheel lock-ups on downshifts).

The 890 is about $2000 more expensive than the 790 was with a ride-away price of $24,470 and to get the Tech Pack will cost a further $1,199.95. And you have to pay extra for cruise control, which isn’t activated even though the switch is right there on the handlebars. Also, no heated handgrips which is pretty stiff post the $20,000 mark. The 890 sees a jump in price but a drop in inclusions which is always a tough pill to swallow.

Our test bikes all had the Tech pack installed so we rode with Rally Mode and the Quickshifter+ and so on. We also had more off-road appropriate tyres fitted which meant switching from the standard tubeless and more road-going Euro rubber, to tubed Motoz tyres better suited to the riding we were doing. This caused some issues with an unusual offset valve and no bead lock, but it was a quick fix by KTM to get better boots on the bikes for the test.

So, it’s not great that Rally Mode is no longer standard and let me give a quick rundown on why it’s so valuable in the first place. First, you get a choice of three throttle response settings in Rally, Street and Offroad. Offroad is a bit doughy but good for slippery days when the rain is pouring down.

Street is a nice delivery and the one I went to most of the ride, while Rally is where you go when you want to celebrate life with maximum attack. Then you have nine degrees of traction control which are adjustable on-the-fly. When you put these two together you get a power delivery that’s extremely mailable throughout a day and able to adjust to the conditions without pause.

The mode change must be done with zero throttle, but that process seems to have been sped up because it’s damn near instantaneous where there was a break in play between modes on the 790.  I rode in Street and with the MSR set on 4 most of the time.

I dialled up the traction control on a river crossing and uphill or two but found that the new engine has such a measured, torquey delivery down low compared to the 790 that it was easier to maintain control through the wrist alone even before the electronics rendered assistance.

In fact, if there’s a singular area in which you find the improvements over the 790. it’s in the power delivery. Where the 790 needed a little clutch to not flame out at low revs, the 890 does not. The new engine handles low speed riding markedly better than the 790 which makes the tricky sections like loose rocks or rutted hills easier to handle. The 890 will hold its gears longer in the bush making it a less busy bike to ride when there are other things to concentrate on.

The 890 also offers a marginally more connected rear wheel feel which makes sliding more predictable and more fun. The mid-range feels much like the 790 but stretches out noticeably longer and stronger which is great on open road sections.

The suspension feel is improved too, particularly through the fork. The 790’s mid-stroke jolt has been eradicated and a much smoother feel has taken its place. It soaks up small trail trash well but shines at speed when things come up on you hard and fast. On the 790 that could often result in a jarring through the ‘bars but that’s just not the case on the 890.

Put the suspension feel together what’s an undoubtedly more versatile and easier to manage engine, and you have an improvement on the 790 that might not be mind-blowing but is nonetheless significant. It won’t immediately drag riders away from their 790s in large numbers, but it does justify the model revision and gifts the 890 a broader appeal.

The Quickshifter+ response is faster and it has a better feel than the previous model but still has a wander into the unknown in higher gears and at higher revs every now and then. The brakes continue KTM’s run of excellence in bringing motorcycles to a stop with good feel and bight and the 890 has an improved feel through the front lever in particular. The clutch offers more feedback on the bight point than the 790 and should be more durable as per the design changes.

The ergos feel much the same as the 790. It’s a comfortable bike for all-day riding and while that adjustable windscreen is a tiny little thing, it does a decent job at deflecting wind on the roads. If you need more shelter from the storms, you can fit the larger screen that comes on the 790 Adventure. The TFT screen is up with the best and easy to read at all times.

I’ve always found the four-way switchblock intuitive to use and make changes with while riding and maybe Honda could have a geez at what KTM have done here and lose some buttons on the Africa Twin. The bike remembers your settings if you stop to grab a sausage roll too so there’s not much faffing about whenever you set off again.

The most direct competitor on a dealer’s floor will be any 790s that are left because the only other bike similar to the 890 is the one it’s replacing. There still isn’t a bike that you can make a direct comparison too and that includes Yamaha’s Tenere 700. No judgement here, they just aren’t much alike. The increased pricing and decrease in standard offerings is the biggest letdown.

The 790 was somewhat defined by Rally Mode and to now make riders pay for it and absorb the overall price increase is a tough ask. That said, it is an astonishing bike to ride for many of the reasons it was great as a 790, now with a more usable engine and suspension and internal changes that look to make it smarter and more reliable.

KTM has developed an incredible package with the 890 and at no point does it feel anything resembling a traditional adventure bike. It’s hard to point to another off-the-shelf machine and say yes, I can hit that section just as hard, or I’d be just as confident in those conditions as I am on the 890 Adventure R. The 790 rewrote the rule book and the 890 just added a few more pages.