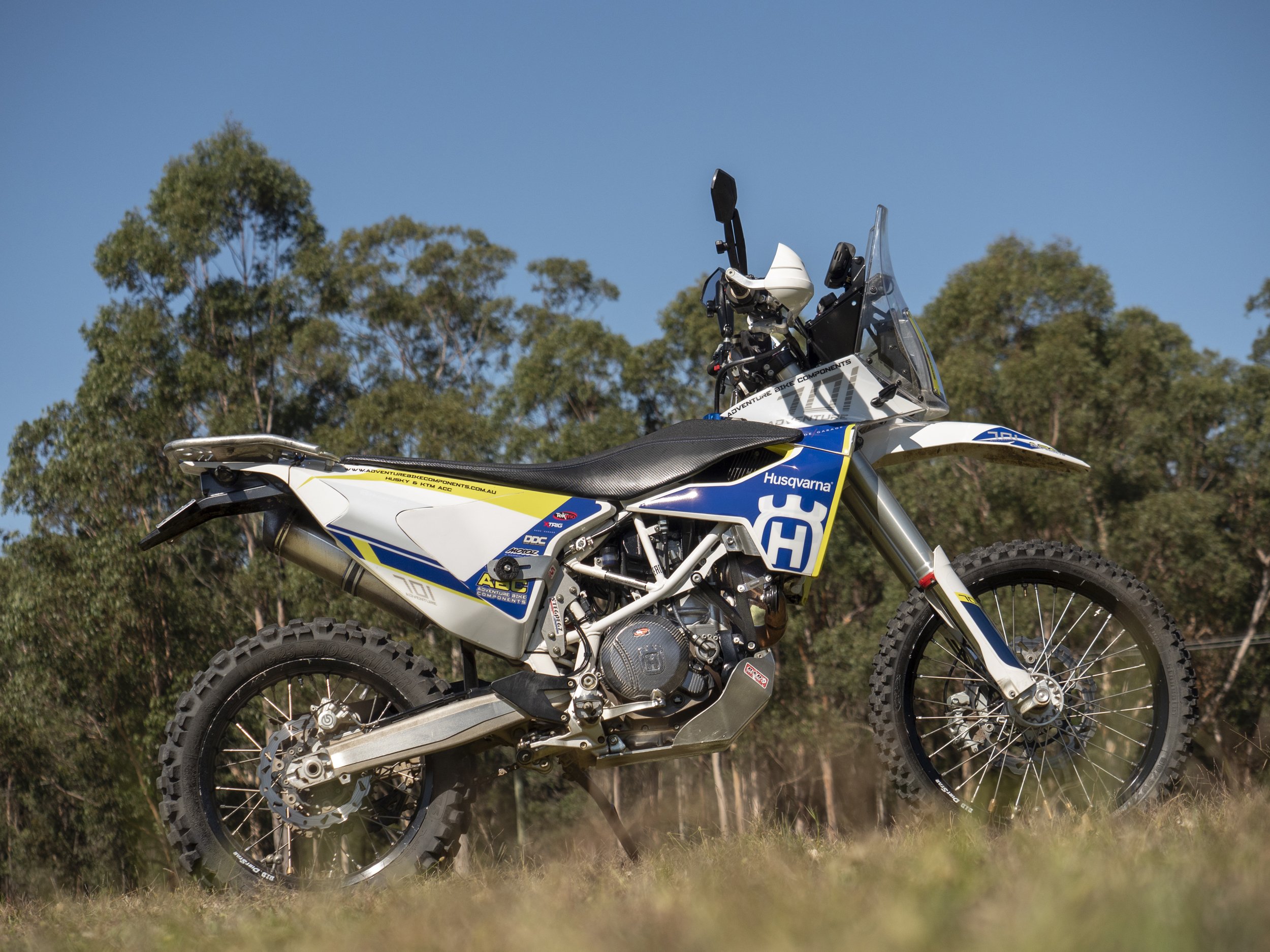 A supplier in Newcastle is building an impressive catalogue of parts for the Husqvarna 701 and KTM 690.

Adventure bikes give us everything we need in a long-distance launch vehicle.

Apart from the proliferation of electronic gadgetry, which baffles many of us brought up on drum brakes, skinny shocks and Choo Choo Bars, there’s little reason to complain about how these machines have developed. And once you get used to all the gadgetry it doesn’t seem so intimidating, in fact some of it is downright clever.

NASA thought the space shuttle was clever too, until they discovered how damn expensive it was to maintain. Talk about buckets of money. Those heat resistant tiles weren’t stuck on with chewing gum and the bloody things insisted on falling off at exactly the wrong moment. So yes, everything can be improved, including space shuttles and motorcycles.

The most popular improvement for bikes of any era has always been performance oriented. Make it go faster. But that’s not entirely the case with adventure bikes. Sure you can buy trick exhaust systems and what have you, but as Mark Cockerill of Adventure Bike Components (ABC) explained when we interviewed him for this feature, the most popular mods these days are auxiliary fuel tanks and towers.

“Our auxiliary tanks give the typical KTM or Husqvarna adventure bike a range of close to 350 kilometres,” says Mark, “and if you’re not familiar with towers, they have two functions. First, they have a windscreen, which takes the load off your arms while you’re riding and makes the bike more comfortable, and second, they give you a place to mount a GPS and a speedo right in front of you where you don’t have to look down to see them.”

That these are practical rather than speed related mods says a lot about the people who buy these bikes. Mark reckons his average customer is between 35 and 75, and the older ones are often contemptuous of the digital world and all its entanglements. “They’d rather talk to me on the phone because they don’t like emails, texts, anything on-line, in fact a lot of them hate that stuff.”

I’ve reached the age of 75 and have therefore earned the right to comment on this particular subject. I don’t mind emailing and texting, but what I despise are companies who make it easy to sign up for their product but damn near impossible to cancel the arrangement. Their business plan for you is Pay-Till-You-Die. Through recent experience I would place Amazon in this category. As for Google, that’s run by bastard bots who refuse to talk to anyone.

Alright, I feel better now so let’s get back on track.

THE MAN BEHIND THE NAME

Adventure Bike Components has been going for three years and specialises in parts for KTMs and Husqvarnas. Mark also works as a safety inspector of mining equipment, which speaks of his technical expertise in things mechanical. Before the drought destroyed it he also ran an adventure bike touring outfit, and the demise of that was one factor that led him to branch out and look for big bike accessories for the local market.

When I asked Mark why he aims at KTM and Husky exclusively he said it’s because over many years riding and racing he’s developed a deep understanding of those two brands, their faults and idiosyncrasies, and feels comfortable advising customers about them, even solving problems associated with factory product. It’s not uncommon for dealers to ring Mark and ask his advice about common but little understood problems.

Mark says he wouldn’t sell anything he wouldn’t use himself and personally tests everything before offering it to the public. That’s a prudent strategy when you’re a small company out to convince hard-nose customers that you’re the man to build “the bike they can’t buy”.

When it comes to accessories, Australians like to fiddle, we really do. Australia is a weird place though, in the eyes of Europeans anyway, many of whom live in little paddocks they call countries. Australia is 95 times the size of Czech Republic, where Raid Garage towers are made, but we have virtually no rallies in this country and so no foreign riders coming here to compete. Maye that’s one reason foreign manufacturers see Australia as a small or insignificant market.

“Overseas manufacturers just don’t understand what Australia is like”, says Mark. “They have no idea of the distances we often ride in a single day, or the type of terrain or the summer temperatures we have to deal with. It’d help if they came out here and had a good look around but not many of them get around to doing it.” In the end, when it comes to accessories for the Australian market anyway, Mark probably knows the product better than the people who make it.

What must be obvious by now are the practical reasons for buying imported product from a local distributor, not the manufacturer. When you buy locally, if an expensive bit of gear starts looking a bit ordinary you can always talk about it with the bloke who sold it to you. You don’t have to track down some booger in Europe or the US, then enter protracted negotiations over many oceans to have the problem resolved by someone who may not be acting in your interest.

The other advantage is that if the importer has any nous he will make the small but necessary modifications to a product if he feels it’s not quite right for Australian conditions. This still happens, and Mark Cockerill’s not too shy to admit that he sometimes tweaks to make sure Aussie customers aren’t disappointed. Australians being what we are, if you sell a product here and it’s not fit for purpose, you’re leaving yourself open to candid and unedited opinion from the customer. It’s better for everyone if you make sure the thing works properly.

For example, to a bike fitted with an auxiliary fuel tank, Mark fits an additional breather so the second tank can’t overflow. Towers are slightly modified too. Rade Garage towers are fitted with an ADR approved headlight, and a reflective material, added here, that prevents light escaping through the side of the headlight assembly. “All the light goes where the rider needs it.”

The range of ABC accessories comes from several sources, not just from tiny paddocks in Europe. As you have learned, ABC’s towers come from the Czech Republic (in fact as far as we know, no other tower manufacturer supplies the Australian market.) ABC’s Billet aluminium gear comes from Vanasche Motorsport in the US; cross-country footpegs from Hungary; and Tekmo carbon-fibre product from China in a company run by a New Zealander. China has a growing middle class, with a growing taste for motorcycles. Manufacturers have noticed this, to the point that KTM now exports to China.

We’re not here to promote someone else’s product but ABC’s stuff looks the real deal and requires no bike modification before fitment. That means your bike can easily be returned to its original condition when you want to sell it or trade.