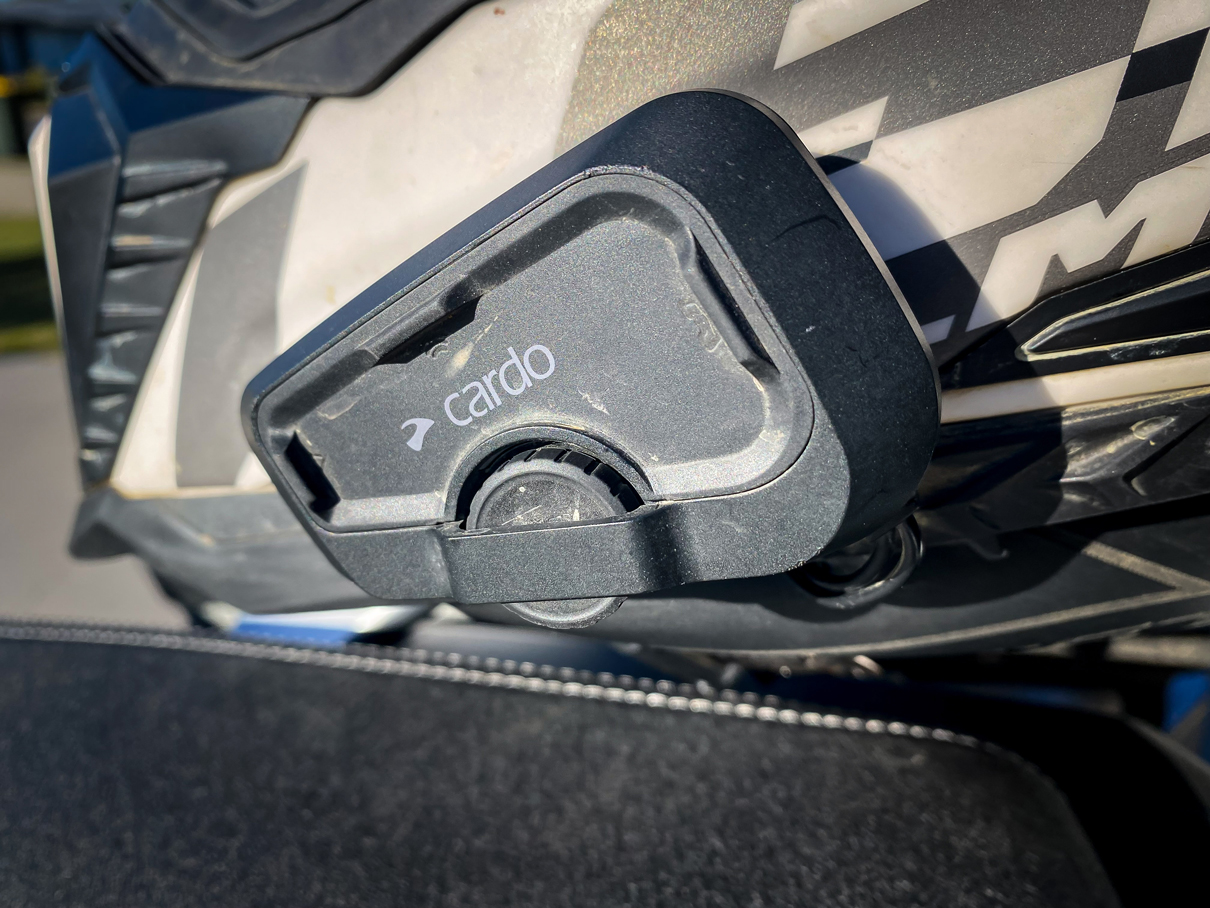 Established in 1998 and now the brand behind some of the biggest names in off-road racing today, FLY Racing is committed to developing the highest quality apparel for all forms of motorcycling. Inspired by racing, driven by adventure, and crafted for performance, our Patrol gear has been thoughtfully engineered as a lighter adventure option, ideal for the warmer months in Australia.

It was Cardo that kicked off the whole rider comms revolution in 2004 with the release of its Scala Rider system. The early system was understandably simple, only able to take and make calls while you were riding, but it set the tech ball rolling.

By 2007 the system had evolved into the first rider-to-rider comms system with an integrated FM radio receiver and is the basis of what we still use today.

I was once an unavowed comms hater, and I believe many have shared this feeling.
I wanted to be left alone on my bike. I wanted to shut out civilisation as best I could which is why I was riding away from it in the first place.

But, unlike my steadfast refusal to believe beetroot has any business on a burger, I came around to not wanting to ride without one. A comms system that is…I can ride without beetroot.

Aside from being able to stay in touch easily, I especially appreciated being able to listen to music, podcasts and audiobooks while I’m riding.

This may sound weird but being able to listen to media while I ride elevates my enjoyment of riding. The rider-to-rider comms is not such a big deal for me, but long road section rides seem less arduous when I’ve got some podcasts to get through.

I remember one specific trail in South Australia that was dead straight for as far as I could see but undulating and wide with a light sand covering.

As soon as I hit the track, Rage Against the Machine’s ‘Bombtrack’ came on and the next four minutes were pure aggressive bliss with a smattering of, I hope an emu doesn’t walk out of the scrub.

As the name suggests, the Freecom 2x allows the best possible Bluetooth 5.2 connection between two helmets (Freecom 4 allows for 4 connections as well as a longer intercom range), so if you’re after a relatively simple system to chat with your pillion passenger, or happy with a shorter range (800 metres max), to talk to another rider then this is the unit for you.

The Freecom range is physically quite small (thinner than the Packtalk), and extremely light. Cardo says the Freecom 2x is waterproof, and while I haven’t dunked my helmet in a river…yet…I have ridden in some horrendous rains for days at a time and never found an issue.

Cardo claims a battery life of 10 days on standby or 13 hours of use from a full charge. Charging is done via fast USB-C which will give you a claimed two hours off just 20 minutes of charging. Given the USB-C charge point is easy to reach, you also charge on-the-fly if needed.

You can install the Freecom 2x using either a sticky mount or a clip-on mount for helmets that don’t offer a flat surface.

Making connections to your phone, GPS or Apple CarPlay for Africa Twin owners is extremely easy and takes just seconds.

And once two Freecom systems are linked they will reconnect automatically every time they’re turned on or if they become disconnected through exceeding the manageable distance between headsets. Just get within range again and the system reconnects automatically.

They will also connect with Packtalk systems and other leading brand comms.

As with any sound system, be it at home or in your helmet, if you don’t have decent speakers then the game is over. Cardo did a deal with the mighty JBL to supply speakers for its systems so right away you’re installing a nice set of 40mm speakers that have an excellent bass response and outstanding clarity.

Via the app, you direct the system to use one of three audio profiles: Bass Boost, High Volume or Vocal (I use High Volume). You can adjust the microphone sensitivity too, but I’ve never had to do that – it seems the clarity on the other end of a call has always been excellent even if I’m in a high wind scenario.

The only thing missing in the Freecom 2x that I use frequently with the 4x is the ability to accept verbal commands (Natural Voice Operation). With the 4x you can tell the system to lower or raise its volume by saying, ‘Hey Cardo, volume up,” or of course “volume down,” if an Enya song just came on.

Apple and Android users can also summon Siri or Google Assistant which allows you to do a few things via speech such as send a text or call ahead for Indian food.

Cardo’s Freecom 2x is a great package for a rider looking to keep the spend down at $359.95 for a single unit pack and $679.95 for a duo, but be able to make and take calls as well as enjoy excellent sound and comms between one other person.

The build quality is extremely high and certainly good enough for the rigours of adventure riding, were staying in touch far from home can be a priority and the right soundtrack can make a brilliant day even better.

HOW TO PAIR WITH YOUR PHONE

Turn the Freecom 2 on by pressing down on the Play button and the Phone button at the same time.
You’ll know it’s on by the groovy, happy tune it plays.

To pair with your phone or GPS (the Freecom has two Bluetooth channels), press down on the Phone button for five seconds. The Freecom will go into pairing mode, flashing blue and red.

Open your phone’s Bluetooth controls and you should see Freecom 2X appear as a connection option. Confirm that option on the phone, the Freecom 2X will let you know it has accepted the pairing on its end with a voice message, and you are done.

Cardo and KTM have teamed up to offer the Packtalk Edge, a full-function comms system for those that want to keep their gear all orange.

The clever system starts with a magnetic mount that the Edge easily snaps onto. From there you get all of the top-of-the-line features Cardo has to offer including the 40mm JBL speakers, Natural Voice Operation and Dynamic Mesh Communication for maximum range rider-to-rider comms of up to 15 units at a time.