DO YOU FIDDLE WITH YOUR CLICKERS IN PUBLIC? 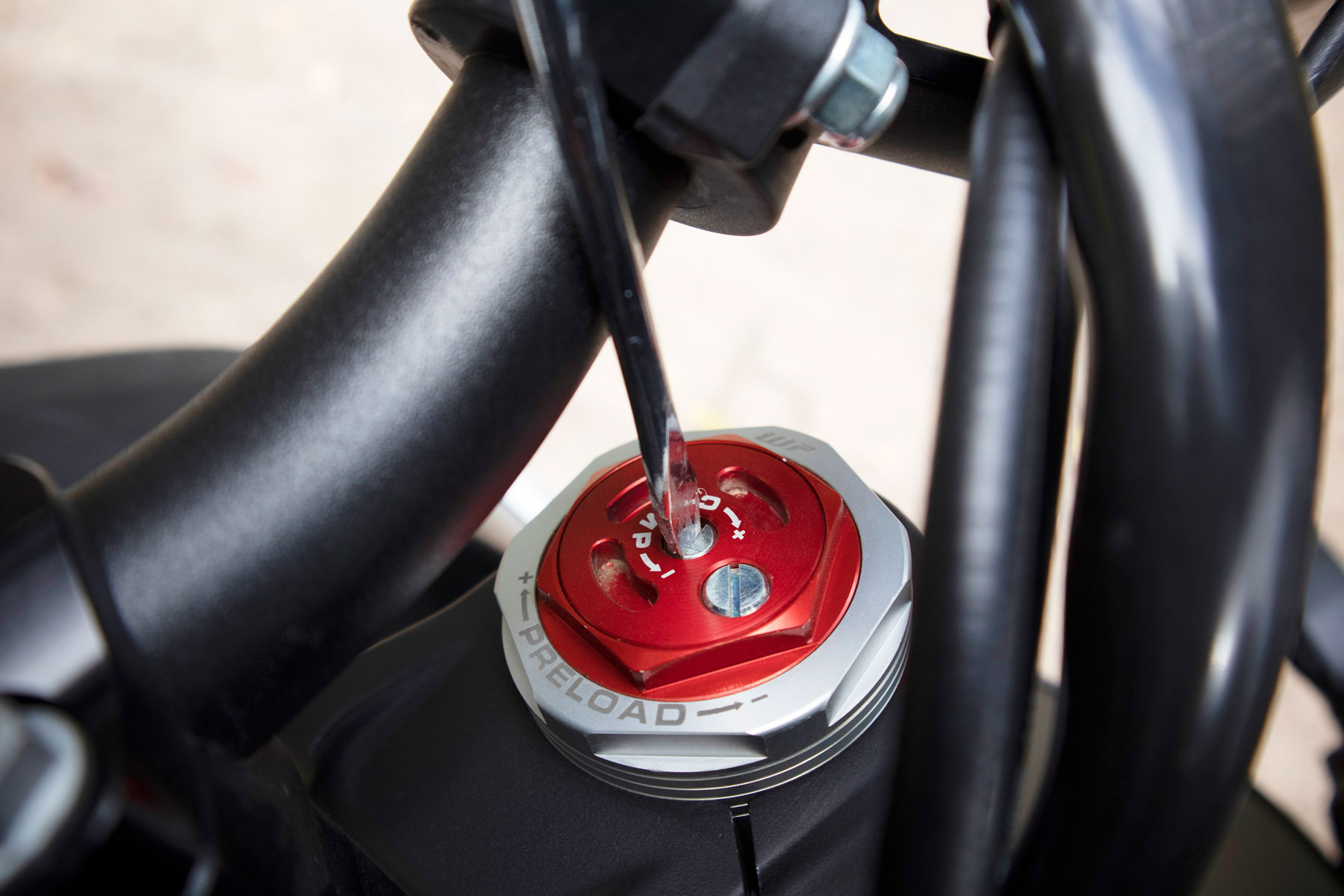 Your bike is a package of components brought to you by engineers that work in different departments and sometimes in different buildings, who may never have so much as sat down to eat a schnitty together in the staff cafeteria.

It’s unlikely that the average engine guy, suspension guy, chassis, guy and electronics guy at a major manufacturer ever catch up for a game of Ultimate Frisbee. None of them ever speak to footpeg guy that’s for sure and why would you? He’s got tiny feet.

Yet all these individual segments are designed to be brought together to offer the best possible ride experience. Be it an R 1250 GS Adventure or a CT110, the focus is on making everything work with everything else…okay, maybe less though on the CT110.

There can be no doubt that the component that divides riders the most is the suspension. One rider’s deep joy is another rider’s utter contempt. But the action of your fork and shock is inherently variable so there’s no real reason why you should accept a shitty feel from either end of your prized machine.

Manufacturers decide on what the suspension is going to feel like before going into production and then hope that suits the largest number of buyers thereafter. It’s a tough task given the same bike could conceivably sell to a 60-kilogram woman who’s ridden all her life, or on the same day to a 100-kilo bloke picking up his first bike.

If your suspension doesn’t feel spot-on right out of the crate, this isn’t necessarily cause for alarm. Manufacturers have built in a bunch of ways to help you achieve maximum suspension happiness.

On damn near all bikes, you have the option to tune your suspension with either a flat blade screwdriver (or your fingers on a KTM/Husqvarna,) via the clickers, or through a visit to a suspension tuner that can go far deeper into oil levels and springs rates and shim stacks.

SO, IS MY BIKE JUST NO GOOD?

How now, let’s not get overly emotional. If you believe your bike could use a suspension touch-up it’s not a cause to get the sads.

Most bikes need a little work to be optimal and the repeat offenders are well known. The Tenere 660 has an ordinary front end unless attended to. A lot of KTM’s WP kit lacks wide adjustability through the clickers and the DR650 benefits from fork emulators, while BMW’s F 850 GS has spaghetti forks.

Most work fine on the road but it’s when you hit the dirt that the frailties are exposed. So let’s look at what you can to do improve on stock settings.

If we’re talking undies, then try and at least be discreet and definitely not on a first date. If we’re talking clickers, then hell yes you should adjust and experiment till you’re all clicked out.

The clicker is perhaps the most misunderstood mechanism on a motorcycle since we lost the need to jet a carby and yet it’s one of the simplest and most useful.

By using these little guys, you change the rate/speed at which your suspension compresses (comes up) and rebounds (goes back down), which seems pretty basic but decent changes can dramatically change a bike’s overall feel.

Using a very basic example, let’s say you run a perfectly stock Tenere 700 and come across a section of drainage humps that goes on as far as you can see. Hitting one jump after another on a bike that’s inherently quite soft will wear thin pretty quickly as you land with a thud after every cursed hump.

By slowing the compression rate at the front and the back you’ll have dialled in a more robust response to a hard hit. Complementing that with faster rebound will see you hitting the ground and recovering in better shape than the standard settings allow, and you’ll have used no special tool or any mechanical skill to achieve peak drainage hump Knievel.

We recommend starting with the clickers before you bust the wallet out and head to a ‘Master of the Boingers’ because a lot can be achieved with a flat blade screwdriver or adjustment via the electronics (KTM and Husky have tool-less clickers).

Find a section of trail and ride it again and again after making changes to compare the difference. Try moving the clickers in increments of four at first to be sure you get a definable change.

To avoid getting sucked into an overly soft feel because it’s ultra-comfy, make sure you have a few good bumps to hit. You paid for those clickers and that fancy suspension so go make the best of it. If you get lost, you can always return the settings to stock in seconds.

Clickers are ultimately best used for fine adjustments though, so if you can’t find a happy place with your fingers, it’s time to visit a guru.

WHEN SHOULD YOU GO TO THE DOCTOR?

If a cream doesn’t work, go to the doctor. That’s just a great piece of personal advice everyone should heed.
When it comes to your suspension, there can never be harm in speaking to an expert at any point on how you can make it better for you. You will almost certainly get more out of tuning your suspension than you will from hunting for more horsepower alone.

Your bike is a finely balanced mechanism and the way the fork and shock operate together largely dictate whether it’s a nice bike to ride or not. And it gets complicated, for example; a shock that’s not quite right can make the front end feel like shit because of the forces it exerts through the frame. But how would you spot that as the problem? The pros know.

Spring rates, oil levels, pre-load, shim stacks, emulators, ride height and static sag are all the common language of the suspension tuner. A good company will listen to you and find you out what you ride, where you ride and a little about how you ride.

They’ll swish all this info around in their insanely analytical brains and combine that with some dark magic, experience and tech tools like a suspension dyno, to present to you a fork and or shock that performs better than the stock kit; often greatly so.

And man, does it feel good to have a bike that gets a good tuning. To have suspension that works specifically for you as opposed to an approximation of what most people would like is worth every effort and not only makes it a more enjoyable bike but a safer bike as well.

WHAT IF MY BIKE DOESN’T HAVE CLICKERS?

That’s OK. Nobody will think less of you for being clickless.

Old style forks may not have much or any adjustment options, like the DR650 for example. They need to head to a tuner to be worked on but it’s often a pretty basic procedure to improve a fork that was designed 20 years ago.

Some modern suspension systems are of course controlled electronically and may not use terms like rebound and compression. The concept remains the same though and instead of you having to get your gloves dirty, a servo motor does it for you.