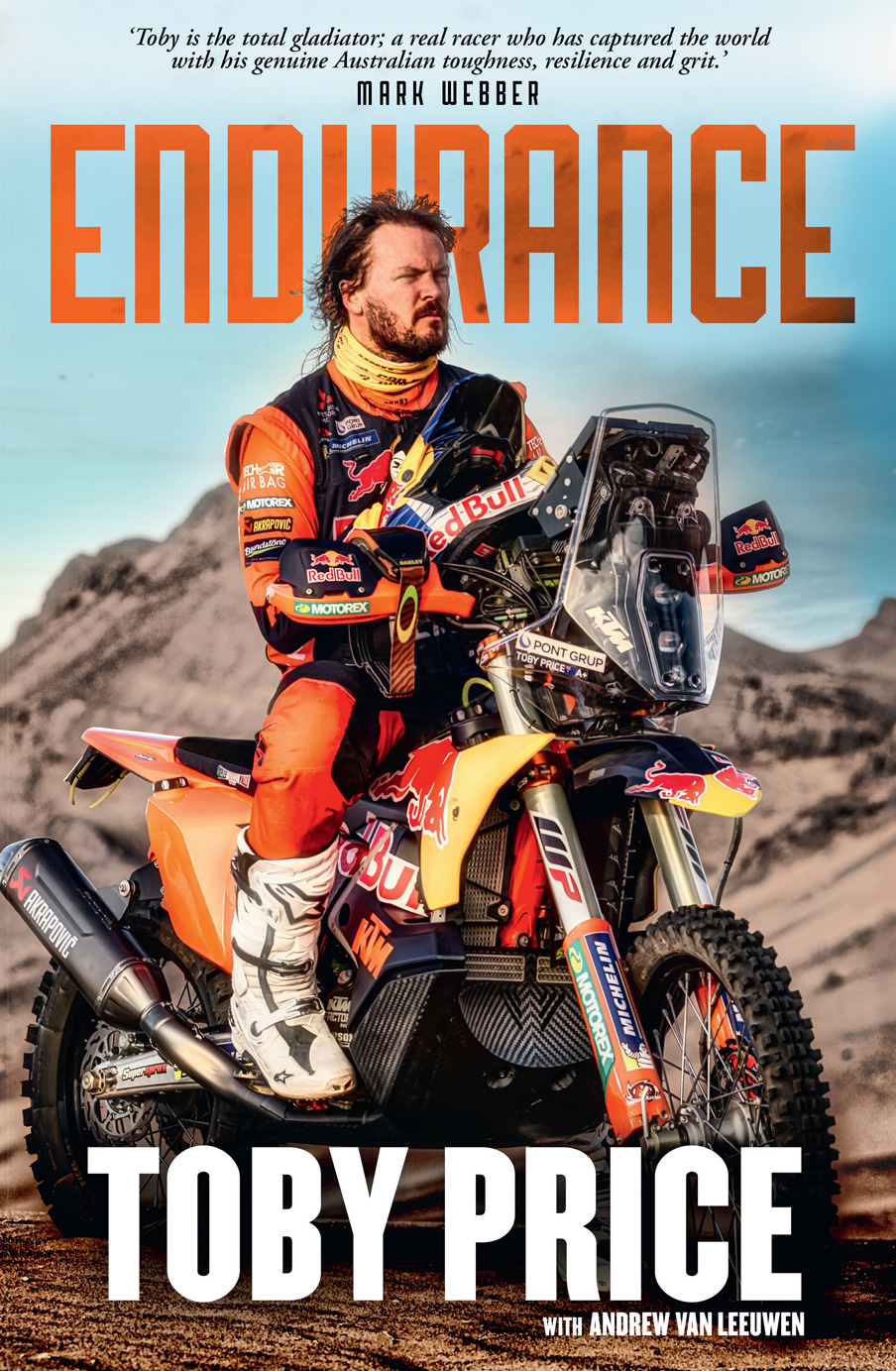 Endurance: The Toby Price Story is part sports biography and part reminder that there are people on this planet that aren’t like the rest of us.

Toby Price’s story is one of endless setbacks through horrendous injuries that almost always lead directly to epic triumphs. Short of a global cataclysm, I’m not sure what it takes to stop this guy from winning races.

There is every type of injury possible in Toby’s story, from his ball sack to his back, his shoulder, wrist, foot and fibia. No part of his body is unscathed and when he has an off it’s a big one.

Toby was a promising motocross/supercross rider as an early pro after a successful period as a junior. But injuries plagued his time on the Factory Kawasaki team and derailed his career all too quickly. After all but giving bikes away, a chance opportunity to ride enduro changed his life. He didn’t really want to and he didn’t understand the attraction. But, he figured it out and won his first national title in his first year (2009) against a four-time world champ. He just never stopped winning from there.

The next move was into desert racing where he would win the Finke and Hattah Desert Races seemingly at will, which caught the eye of the KTM Factory Rally team. And the path to Dakar was forged and with two overall wins, three podiums and multiple stage wins Toby is now Australia’s most successful Dakar rider by a long shot.

I spoke to Toby just after he won Dakar with a broken wrist. I had a busted wrist at the same time, and I was bitching to anyone who’d listen. He goes out and wins the toughest motor race on the planet. He addresses dealing with that injury in Endurance, writing:

“Given it was my throttle wrist, I figured if I could find a way to give it a rest on the liaison stages that would be a huge benefit. I’d already tried constructing a makeshift cruise control by wrapping race tape around the inside of the handlebar between the grip and the handguard. It made the throttle hard to twist, but once I got it to a certain point it would hold itself in place. It worked, but a little too well. I had a couple of hairy moments where I couldn’t wind the throttle off, If I wanted to slow down I had to grab the clutch, let the engine rev its head off and then dump the clutch again.”

He also told me he rode sections with his left hand on the throttle to give his injured right hand a rest. Yeah, that is mental.
But, Price has also seen times that seemed so dark he got truly lost in the trauma. His crash in a 2013 Hare and Hound race in the US left him with three broken vertebrae and only a miracle saved him from becoming paralysed or killed. It is one of the more harrowing sections of the book.

“As I was beginning to process what was going on the doctors started to fit the halo to my head. There was no pain medication, nothing. They drill these sharp steel bolts through my skin and into my skull. There was blood pouring down my face, it was like a horror film and I was about to become a murder victim. It was the worst pain I’ve ever felt in my life. I was begging them to put me to sleep, to give me a needle and just knock me out.”

I was there to witness some of the events in this book. I stood in disbelief when he beat Stefan Merriman for the 2009 AORC title. I’ve seen all of his Finke wins, including the one where he was hobbling around after copping a stick through his boot. He lapped me at the Hattah Desert Race (to be fair a lot of people did).

I’ve seen him wipe the field in the Australian Four Day Enduro, an enduring memory of which was watching him dismount the race bike at the end of long days in the Hunter Valley and go have pushbike wheelie competitions with kids. You’d think he’d be knackered, but he always had time for the adoring fans.

At Finke, he stays for hours signing autographs and smiling for photos. Everyone has gone home, and he stays well past sundown to show his appreciation.

Toby has grown in profile lightyears beyond the young bloke I first met in 2009. That day in Young when he won his first enduro title, a lot of people weren’t sure who he even was. Now, he’s is world-famous, perhaps even beyond a Chad Reed level (that’s good bench racing fodder). He has made a career beyond the wildest dreams of his Aussie competitors and he’s has had to overcome brutal challenges time and again to make it work. His story of course isn’t over, and there may be a part-two someday with even more wins on both two and four wheels.

You can buy Endurance: The Toby Price Story right here.