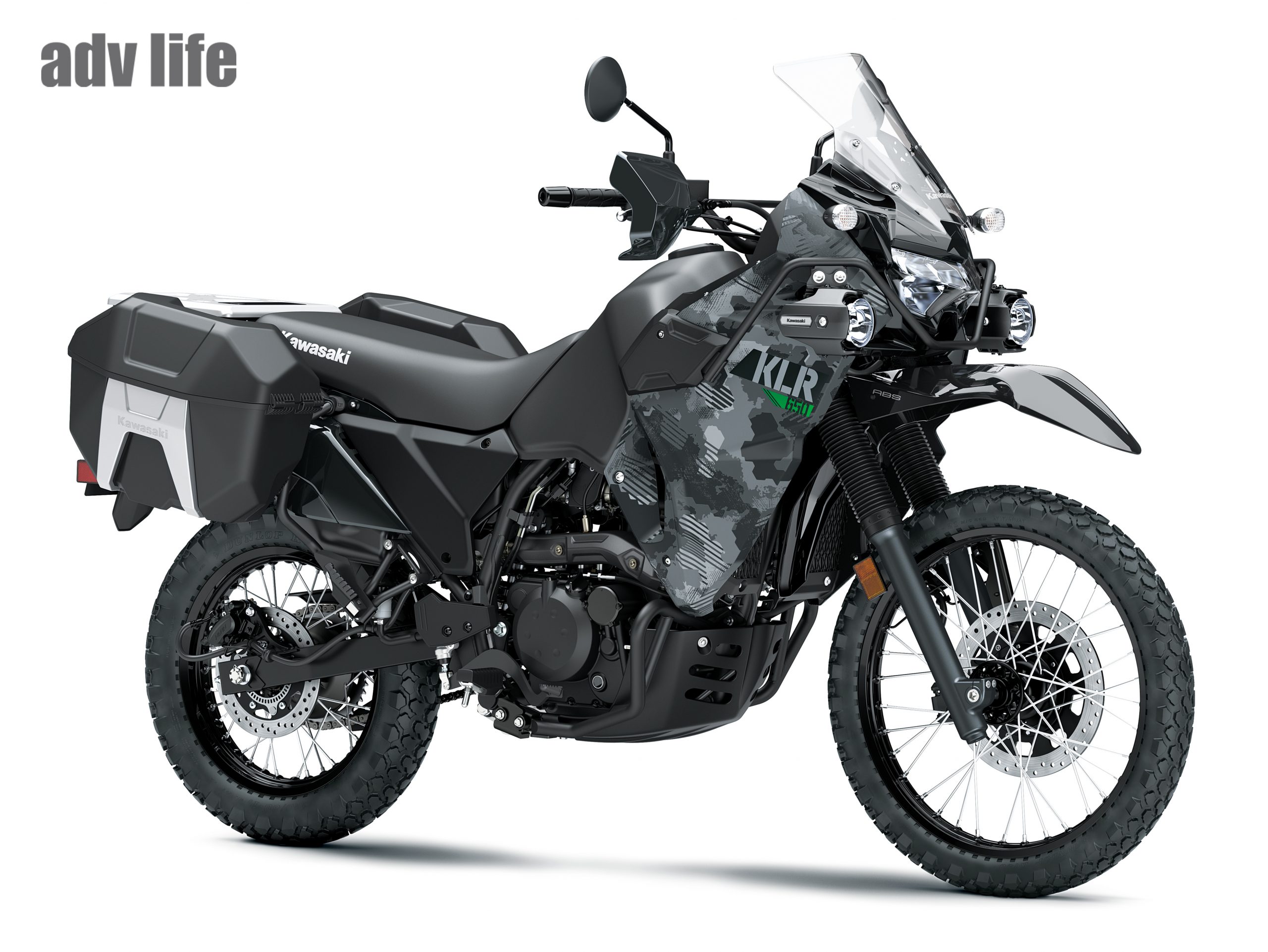 Kawasaki elects to refine instead of redesign the KLR 650

The epitome of a successful model, Kawasaki’s KLR650 was born to the world in 1984 and has seen little attention from the engineers that birthed it since that time.

In 2008, Kawi decided to give the KLR a little love and made some changes to the engine, the forks jumped from 38mm to 41mm units, a new swingarm was fitted and dual-piston brakes were fitted both front and back. A new seat and fairing plus an improved headlight rounded the modest but appreciated updates to a bike that was already 21 years old.

WHAT’S NEW IN THE ENGINE?

A fair bit, but it’s still very much the same engine. Fuel injection is the big shift here but interestingly, Kawasaki claims the bike meets Euro4 emission standards but doesn’t mention Euro5, which is very much a concern for current model bikes coming out of all major factories right now.

WHAT’S NEW WITH THE CHASSIS?

Integrating the subframe with the main frame is an interesting move. It will be stronger than the old set-up but if you do damage it, then it can’t be easily replaced like most modern subframes. That said, the chance of a KLR loop-out is somewhat slim. Extending the swingarm by 30mm will change the way the bike feels over the previous model.

WHAT’S NEW WITH THE SUSPENSION?

KLR suspension is what it is. It’s not terrible but it’s not great. It’s done so many miles that there are plenty of guys with tuning tricks up their sleeve.

WHAT’S NEW WITH THE BRAKES, WHEELS AND TYRES?

It’s worth reminding ourselves here that the KLR runs a 21/17” wheel set and having that 21” front is a bonus in the dirt.

WHAT’S NEW WITH THE ERGOS?

The old seat wasn’t as bad as the DR650s is, but a more comfortable perch is always appreciated.

WHAT’S NEW WITH THE BODY?

Out with the analogue and in with the LCD. It’s not fancy but it’s a decent looking unit and goes a long way to modernising the bike’s appeal.

WHAT DO YOU GET ON THE ADVENTURE MODEL?

Kawasaki is offering an Adventure model with a few more bits and pieces fitted and a groovy camo graphics kit. The Fog lamps and accessories sockets are always handy too. 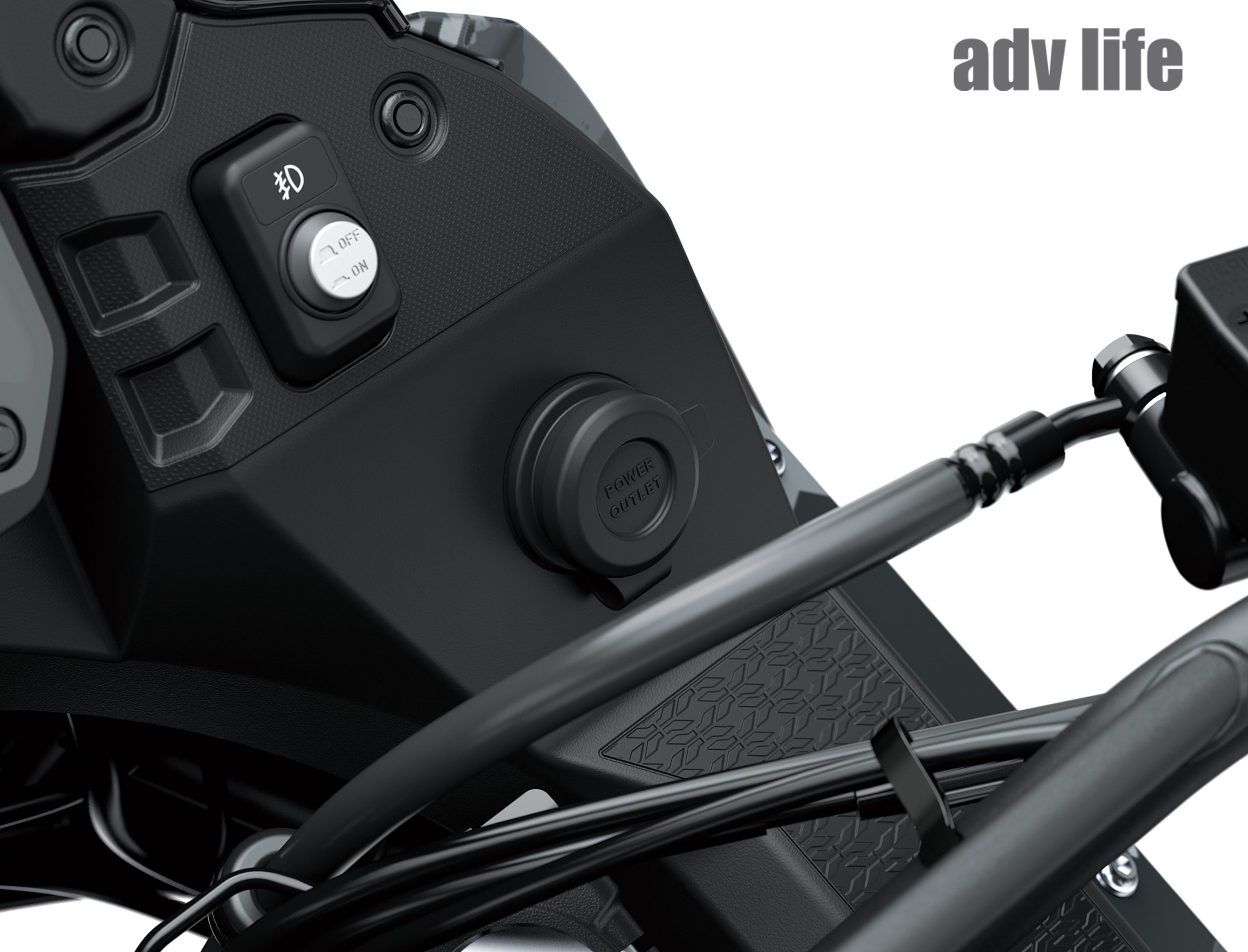 Kawasaki is offering a decent array of optional extras for the KLR, some of which appear as standard on the Adventure model.

DID THEY GET IT RIGHT?

Yes and no. It weighs more than the previous model. Like…up to 20 kilos more. That’s a lot of weight to put on a bike that isn’t gifted any significant power gain from an already modest horsepower base.  The ABS is not switchable and it still doesn’t have a sixth gear.

But, Kawasaki has elected to keep a reliable and it must be remembered, successful recipe intact. If it were to build a modern adventure bike, then the KLR is far too antiquated a base to start from so why try to morph it into something completely different?  The Versys package is a better base, but they sell too so why mess with them? Well, because a lot of us want to ride a Kawi off into the dusty sunset with our mates who are on KTMs and Yamahas and Hondas and BMWs and so on. If you’re a Kawi fan, that’s the dream. The KLR 650 is a capable bike, it’s just a little mellow and a little docile. It’s now heavier and doesn’t that highway gear. But it is comfortable and reliable and extremely good value. Kawi hasn’t gifted the world a new adventure bike, just freshened up an old favourite. The 2022 model will arrive sometime in mid-2021. Cost is yet to be announced. In the meantime, we like the look of that Adventure package.

PrevPreviousON HER BIKE: EPISODE 106 – Solo motorcycle ride in torrential rain in Zambia
NextThree Super Simple Tips to Improve Your Rock Skills: So you can ride on Mars with Elon Musk and Matt DamonNext