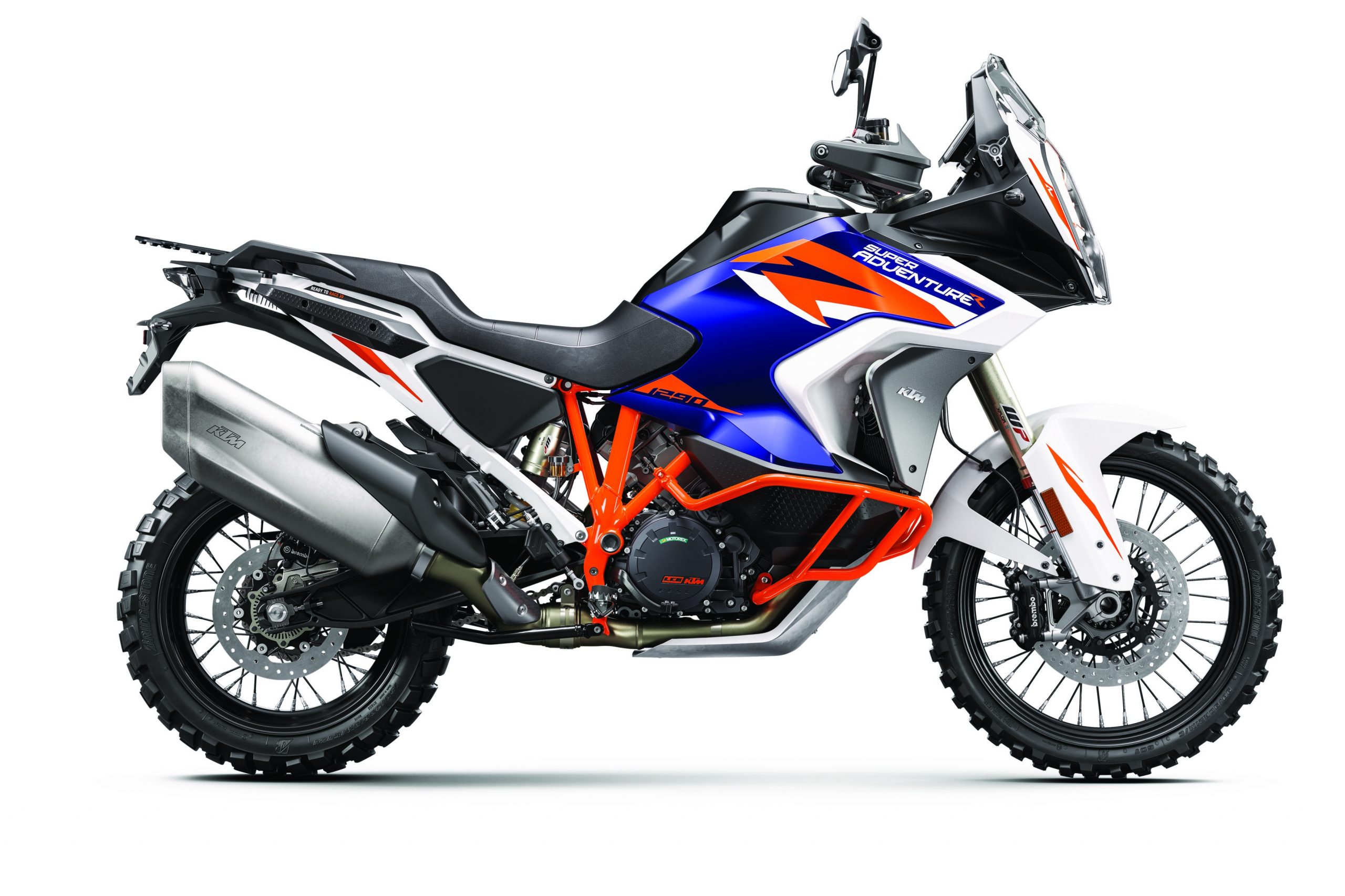 Since 2008, Giant Loop has evolved from two adventure motorcycle riders with a single saddlebag available only online, into one of the world’s most innovative motorcycle soft luggage and gear makers. Our adventure proof packing systems and gear now extends beyond just motorcycles to include all types of powersport activities.  ♦  Riders worldwide energize and inspire us to continually improve, and each design is prototyped and tested in some of the most demanding off-road conditions.  ♦  We started Giant Loop with the hope of opening up new possibilities for riders to explore this magnificent planet, and today we stand proud to have expanded horizons for a worldwide community of riders.

Giant Loop has evolved from two adventure motorcycle riders with a single saddlebag, into one of the world’s most innovative motorcycle soft luggage and gear makers. We started Giant Loop with the hope of opening new possibilities for riders to explore the planet, and today we stand proud to have expanded horizons for a worldwide community of riders.

Impressively, the KTM 1290 Super Adventure R is 90% changed or updated from the previous model.
Among those changes, you’ll find a 10-kilogram lighter chassis, a three-part dropdown fuel tank, a lower seat height of 880mm and a new TFT display. The list is in fact so staggeringly long it’s just not worth putting it here and making you scroll down that far.

Power figures haven’t changed from the previous model, and that’s just fine. There’s only so much a person needs right?

Ergos have changed substantially over the previous model and the two bikes feel quite different to sit on. I can put both feet on the ground which is advantageous on a bike this size.

That said, the seat shape locks you into a single position (can be rough on the goolies after a few hours), and I’d like to try a flat Rally style option to see if that’s workable while allowing you to shift body weight.

Thankfully the standing position is excellent and if I wasn’t so lazy, I’d be standing instead of sitting down wishing I had a flat seat.

You can witness just how lazy I am right here. Or check out the four-day ride I did with Maschine here.

The engine offers something for everyone. For road riders looking for power to spin their beanie then you got it right here.

In Sport Mode, the 1290 will take off like a whipped unicorn and from there it’s kind of like riding Mike Tyson. In Street Mode it feels more like riding a ‘roided-up Michael Bublé, the power is still there but the delivery is more mellow.

There’s also a Rain Mode which seems appropriate during a La Nina year.

But, we all know the fun really begins in Offroad Mode. And I’d like to give Offroad Mode some credit here.

It’s kind of the forgotten cousin of Rally Mode, locked under the stairs and never introduced to visitors. I won’t stand for Mode Abuse.

Offroad Mode chops the 160Hp to a more usable 100Hp which is a sweet spot for the big bikes in the dirt.

I ride in Offroad Mode quite a lot because it offers a decent and versatile feel and also, the mode we’re about to address requires real-time decision making and I sometimes don’t want to think much beyond the basics of riding, like dodging kangaroos that seek to be euthanised by motorcycle.

LIKE THE BIG BIKES? CHECK OUT THESE TESTS FOR MORE OF THE MUMBO

Rally Mode is an option that you access by stumping up for the ‘Tech Pack,’ which is a bit rough given you’ve paid $30,000-plus for the bike and the mode is already loaded into the ECU.
I think I’ve paid about the same for a doughnut and a beer at the airport though.

Rally Mode gifts the ability to manage your traction control in real-time and therefore respond to changing terrain and conditions faster than on any other bike in the known universe.
Numbered 1 to 9 with 1 being the least amount of intervention, you can dial in the response you need from the bike on the fly with no need to dig further into a menu.

At play are things like torque loading, engine speed, throttle and gear position as well as lean angle sensors and accelerometers. For the rider, it’s just a number and a press on a button.

You can also alter your throttle response and I believe Street gives you the most measured output that is never dull but more manageable than the super aggressive Rally. Totally a personal opinion and you may differ. I hate beetroot. Live and let live.

The 1290 is a deep and fast thinker and I think I’ll ask it to do my taxes. The number of sensors and calculations being utilised for Cornering ABS to be effective is mind-blowing.
But the beauty of it all is that you don’t notice 99% of what’s going on besides the variables you’ve chosen to alter from one section of trail to another.

And the electronics allow you to play with an engine that left to its own devices would be mostly unmanageable in the dirt as your rear wheel morphs into a rabid Pitbull with a fistful of throttle.

The new switchblock is not much to my liking. I found it cramped and had a tendency at times to hit more than one button.

Also, the cruise control and menu-reverse buttons are soft-touch which is nice but, given you don’t get any tactile feedback through your gloves, you have to look down and check that they’ve been engaged which takes your eyes off those kangaroos road for a moment.

The Cruise Control does not disengage immediately with the clutch pull which gave me a ‘holy shit’ moment coming into a roundabout.
I expected the cruise to cancel, but after finishing my downshift and letting the clutch out, the bike attempted to accelerate back up to the 60 as I started the turn left. I experimented later and found that if you hold the clutch in for a little longer it does cancel the cruise.
I’ll admit this was a case of me not knowing something, but I kind of like the ‘clutch kills cruise’ system a bit better.

For those that have suffered the pain of the failed key fob, KTM has finally introduced a new fob as well as an anti-relay setting so filthy criminals can’t start your bike through electronic trickery.

TAKE IT FAR, FLOG IT HARD

The single biggest cumulative change on the KTM 1290 is in the weight distribution. Much of what was once high, is now low and the effect is immediately apparent.

The 1290 feels more planted on flat turns and loose terrain. Any momentary loss of control at an average dirt pace is easier to pull back into line and it’s nimbler in tricky conditions, making it plausible to take the 1290 where you wouldn’t bother with most 1000cc-plus bikes.

That said, it takes a level of skill, confidence and experience to get the best out of it because it can be bloody intimidating. That’s a common story with all litre bikes, but this is the biggest motorcycle in the Milky Way galaxy with a 21-inch front wheel and the price to pay for dropping it is a deadlift worthy of Dean Lukin in the ’84 Olympics.

Crucially though, the big Kato can be tiptoed around when the need arises with excellent balance and poise for a big rig and through the electronics, you can make the power feel somewhat dull, which is a good way to get acquainted for those moving up to the Godzilla class for the first time.

The 1290 will drink some fuel in techy terrain, much more so than when it can run freely for a range of over 400 kilometres and there are better bikes for doing technical riding frequently (see 890 Adventure R), but you certainly aren’t limited to three-lane freeways in perfect weather.

I rode single trail and double a lot and while it wouldn’t be my go-to on the tighter stuff it’s impressive and a lot of fun when there’s just enough room to shift the back end. I also rode in some horrendous weather, like 40 days and 40 nights type shit. Get two of every animal and let’s go boating.

The 1290 was sure-footed in slippery stuff and the advantage of the lower seat height came to the fore when I had to paddle with my feet.

But it’s the open trails that the 1290 Super Adventure R lives for. And it’s there that you come to appreciate just how fun a dirtbike mutated and muscled-up to this degree can be.

It’s not because it has mountains of biblical power that needs an atoll and unwitting native population to be let loose on…it’s because it sits so well on the trails, soaking up damn near everything and sitting confidently at speed.

The balance of the 1290 is much changed from the old model to the new and that could have gone very wrong. But the way the front stays planted on even the skatiest of trails is an undeniable improvement.

The 1290 Super Adventure R is a beast…but a beast that understands that if it plays too rough then nobody will want to be its friend. For riders that hunt in tighter trails, taming the 1290 requires more skill and fitness than an 890.

For riders that enjoy the faster, sweeping, open trails but also want to hit rougher terrain and not feel the scatty nature of a 19-inch front wheel, there are few limits but your own on the KTM 1290 Super Adventure R. And if you’re looking for set-up tips look no further than the mighty Chris Birch who knows a thing or two about riding.

It’s when you’ve got more room to move and a waypoint far over the horizon that the KTM excels and there are few big bikes that offer the offroad capability as well as all-day, mile-munching comfort. In fact, there might not be another quite so versatile. It’s a hell of a ride.