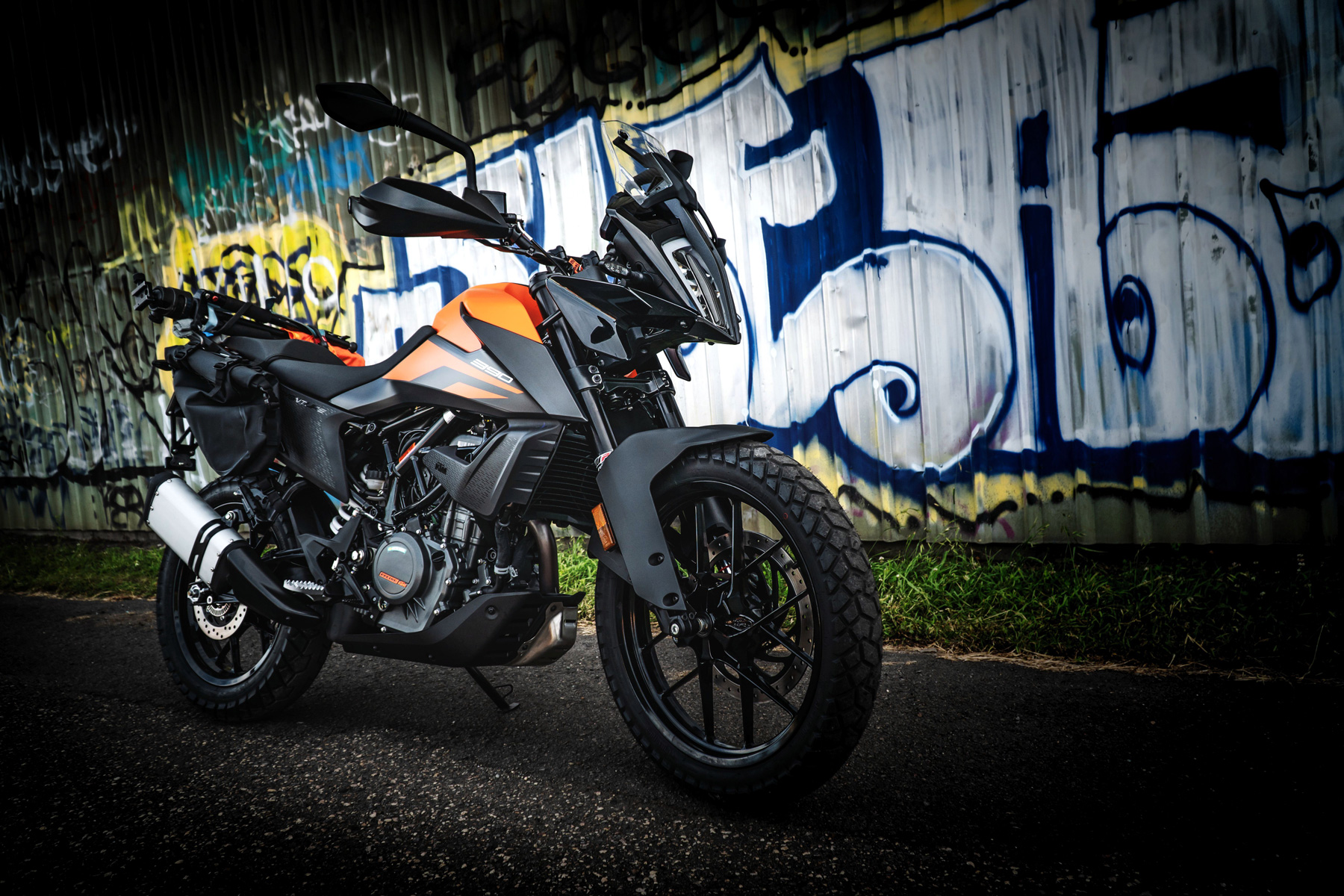 STORY AND PHOTOS BY DAMIEN ASHENHURST

If you’ve written off KTM’s 390 Adventure as too small, too low, underpowered and under sprung, you might be right…for you. But you’re missing the larger point. Adventure and adventure riders come in all shapes and sizes, plus not everyone has decades of riding experience under their belt.

Every sport or hobby has an entry point. There are beginner’s boomerangs, entry-level sewing machines and guitars for novices. And it’s vitally important that adventure riding has bikes that cater for anyone looking for that ideal first bike.

It’s equally as important that there is more on offer than just the fire-breathing beasts that grab all the attention with their fancy 160Hp as well as ever-increasing seat heights and price tags.

We’ve grown to appreciate the finer things in life like TFT screens with Bluetooth connectivity, slipper clutches, cornering ABS and lean angle traction control and KTM it seems, concurs even when it comes to its smallest Adventure model sold in Australia (a 250 Adventure is sold in some markets OS).

Launched in 2019 as a direct result of the Bajaj partnership (Indian company Bajaj Auto currently owns 48% of KTM AG), KTM presented to the rest of the world a motorcycle conceived in India and made in India to suit the Indian market.

To keep the price tag down, compromises are made such as forgoing Brembo brakes for Bybre, which is, in fact, a subsidiary of Brembo. Bybre is short for ‘By Brembo’. WP Apex suspension is fitted instead of WP Xplor as well as 19 and 17-inch cast wheels.

The styling is all Austrian and the 390 is unmistakably a part of the Adventure family. From afar and up close the bike looks like a KTM Adventure should.

The nice wide bars, excellent footpegs and comfortable seat taking care of the important touchpoints and maintains that familiar KTM feel. Yes, this bike is less than half the price of its bigger cousin the 890, but it is undoubtedly carrying the same DNA.

THE BARRY WHITE OF KTMS

Quiet and unassuming, the 373cc single-cylinder engine is perhaps the single most off-putting factor for those that scorn the 390 from afar, and yet it’s one of the bike’s better attributes and worthy of praise.

Producing a claimed 43 horsepower and 37 Nm of torque, the figures are neither eye-watering nor insignificant. But here’s the thing; I love big bikes and big engines. They spin my beanie and I have a memory bank full of epic times on 300 and 500 two-strokes, 500 four-strokes and 1000cc-plus adventure bikes.

So, I expected to be underwhelmed, bored and disinterested in the 390 much in the same way I am with anything Coldplay has ever recorded. And yet sneaky revelation snuck up on me as I was zipping through the mountains about an hour from my home. I was enjoying the engine. How could this be?

It seems, believe it or not, you don’t need a minimum of 100 horsepower to have fun in the bush. My pace was fine on and off the road, traction was abundant, and the little engine that loves to rev worked like a farm dog with no want for attention or adulation.

It’s moments like these where you question why we gravitate towards the big-bore monsters at all. But of course, that’s because I stayed within the bike’s comfort zone.

I rode in the city which I hate but where it was actually fun for once given the 390’s nimble and peppy nature. I road on the freeway at 110kph and it did the job, and I spent a few days in the bush on varying types of trails.

The 390 likes the dirt roads and double trails of beginner and intermediate grade and that makes perfect sense. The bike is doing exactly what it was designed for on these types of trails and you can go right around this country on trails just like them.

If you want to harder and push the pace you’ll find limitations pretty quickly, but it won’t come from that engine first.

KTM has gifted the 390 a generous tech package that pretty much leaves the below $10,000 competition in the dust. In fact, it’s only around $2000 more than a Royal Enfield Himalayan which is a bike built using technology familiar to an 18th-century chimney sweep.

The KTM My Ride app will allow navigation via the 5-inch TFT screen as well as phone calls and your favourite Barry Manilow tunes to flow through to your helmet comm-system.

The switchable ABS is decent and like most, best switched off in the dirt so it’s active at the front but you can lock the rear. Overall, I found the Bybre brakes to be decent, but certainly not as strong and lacking in feel compared to Brembo units which would perhaps be overkill on the 390.

The traction control is not a favourite of mine and it annoyingly resets to on every time you restart. In my opinion, it’s best left off in the dirt.

You scroll through the menu system using a simple four pad cluster on the left side of the bars and it really couldn’t be simpler to use. It’s not as feature-packed as its bigger cousins so it demands little of your attention while riding, but what it offers no other manufacturer comes close to in the price range.

APEX OF THE SPECIES

WP Apex suspension has taken some criticism but most of that should be directed at the 790/890 Adventure which is too much bike for Apex to handle offroad (Reminder that the R models carry WP Xplor).

The 390 however carries the Apex kit quite well. The fully adjustable 43mm fork handles average trail conditions really well and won’t be put off by anything, even at a feisty pace until genuinely deep and square edge hits start coming. To mitigate this, you slow down. At lower speeds, the action is just fine. Life can be that simple sometimes.

The shock is less forgiving and transfers hard hits through the chassis upsetting the front that was otherwise happy doing its job. The suspension travel is short at 170 and 177mm front and rear and the ground clearance is a meagre 200mm and this represents the 390’s single most limiting factor.

Again, this is a pace and line choice issue. Slow down and avoid square edges where possible and you’ll be happy and take on much of what lays ahead.

That low travel and ground clearance doesn’t translate to a particularly low seat height of 855mm. The seat is quite wide too so shorter riders while appreciating that it is lower than the bigger bikes, may still have to side-saddle a little at lights.

At 5,11 I can put both feet on the ground and it makes paddling through slippery sections easy, but should I shrink a few inches in height through exposure to 5G (I also heard it makes you grow a tail and glow in the dark, both of which I’m really pretty keen on), then I may want for a lower perch.

At 158kg it feels like a bike this size should be a bit lighter but honestly, it was incredibly refreshing moving a smaller bike around the shed and so much less fatiguing riding it in the bush than some much heavier and more aggressive bikes.

Our bike had two changes from stock. We have the Quickshifter+ fitted, which I use across about 30% of shifts. It’s particularly handy in street situations but I’m so habitually attached to using a clutch I haven’t made the leap to 100% use in the bush.

It does make certain scenarios easier though, particularly when you’re standing and accelerating hard and need to shift up, or when you come across a seriously rough section and need to hold on to keep control but also shift up for down.

Our 390 also had the KTM soft panniers attached, and they definitely got a workout and came through with flying colours and no water leakage. I also saw them on an 890 Rally get smashed in crazy rains, mud holes and wet trails for four days on the recent Get Me Outta Here tour organised by Maschine. Again, no water got in and no damage to the bags. They’re a pretty simple set-up but very effective.

There’s a neat parallel here to the small car market.
Small cars are a viable option for people that can’t justify the price point and don’t need the power that comes with a big car. But they do appreciate all the niceties and digital integrations of a modern Mazda CX3 for example.

In that same line of thinking, the 390 Adventure sits well below the 890’s price point, it doesn’t intimidate in any way shape or form but is well-appointed with a more than decent electronics suite.
And it’s fun to ride. The KTM 390 Adventure is 10-pounds of personality in a 5-pound bag.

Its versatility makes it such great value for anyone that commutes during the week and loves the lite adventure on the weekend. It’s arguably more versatile than the very expensive 1290 when you frame it like that.

It’s shown to be durable and exudes KTM Adventure cool so it’s not out of place amongst the big units. That was something I saw on a recent 4-day ride where one of the female riders completed everything the 7-odd other riders did in sometimes wet and challenging conditions on her 390.

KTM’s 390 Adventure has an awful lot to offer a wide range of riders. You might even be surprised by what it can offer you.