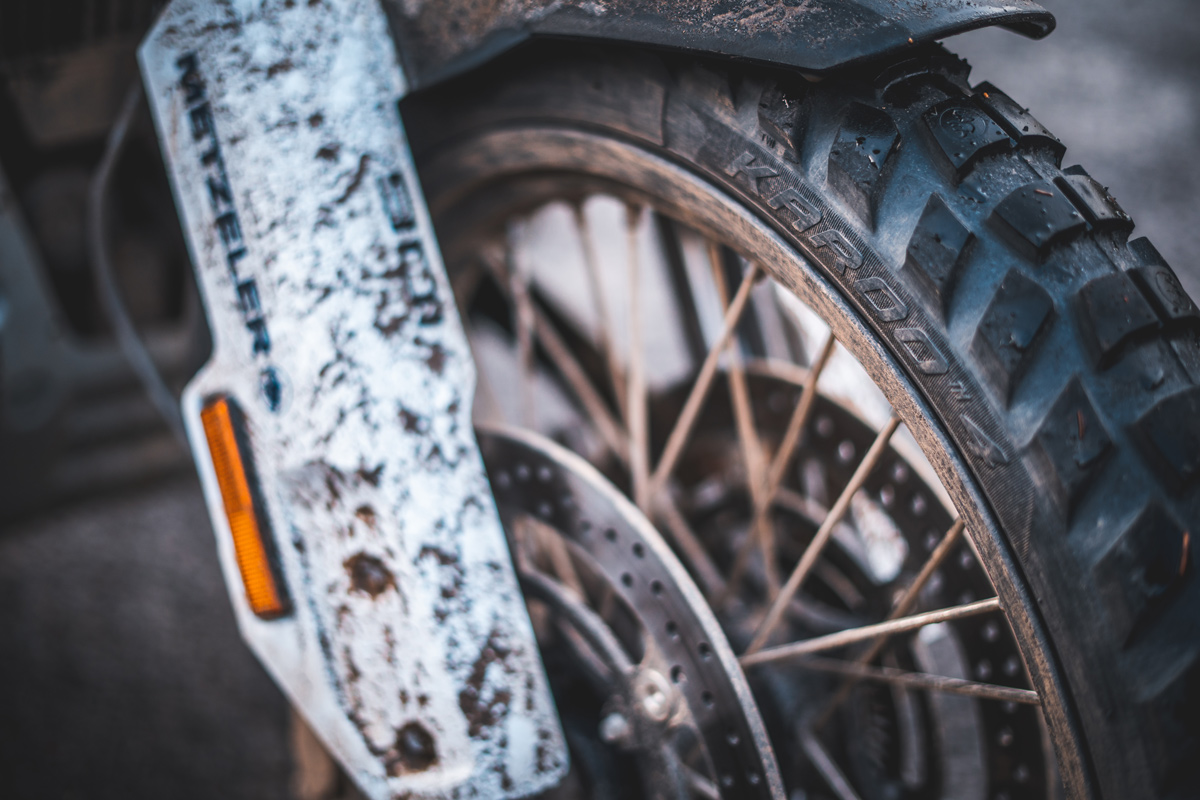 Established in 1998 and now the brand behind some of the biggest names in off-road racing today, FLY Racing is committed to developing the highest quality apparel for all forms of motorcycling. Inspired by racing, driven by adventure, and crafted for performance, our Patrol gear has been thoughtfully engineered as a lighter adventure option, ideal for the warmer months in Australia.

Replacing favourites is a tricky business, as both Coke and Vegemite have found in the past. Vegemite 2.0…what was that all about?

Metzeler released the Karoo 3 back in 2013 and it quickly inserted itself into the conversation about which are the best tyres for offroad adventure.

The last time I ran the Karoo 3 was the BMW Safari Enduro from Mildura to Alice Springs in 2019. On that epic ride, we had a mix of sand, deep and shallow and the kind of rocky hard pack that produces flat tyres with regularity.

The loop around Arkaroola and the track into Mt Dare took a lot of scalps, but the Karoo 3s on my F 850 GS Adventure held up to it all. I did the ride on the one set without a single issue, and they handled the wildly varying conditions with ease.

So, to take a tyre that’s proven to be a favourite for so many and change it, even after nearly 10 years in service, can be a daunting task.

The launch for the 2022 Karoo 4 was held in Sydney in a spot that had us close to some well-known classic trails and roads. Metzeler was also launching the new Tourance Next 2 tyre which is a 90% road tyre we rode on the second day.

The Karoo 4 isn’t a radical departure from the Karoo 3, instead Metzeler has worked to find improvements in critical areas without upsetting a proven performance.

It was made clear that the tyre needed to be redesigned for a world that has embraced the big and powerful adventure bike, where the combo of 150-plus horsepower and 250 kilos is pushing the limits of available traction.

One of the areas of focus was in wet conditions where braking performance was improved and more traction has been found in muddy situations while the knobs are designed to self-clean better than before, expelling soil more efficiently than the Karoo 3.

Metzeler claims the front has 20% more silica and is softer but stronger across the tread face while more rigid in the carcass.

The dual-compound rears have improved abrasion and tearing resistance as well as improved thermal stability.

DYMATEC™ technology is said to best ensure wear consistency through variable groove wall angles, and Metzeler mentioned that while the overall wear has not been greatly improved, the grip on offer as the tyre wears is superior on the Karoo 4.

The only real way to tell if a tyre works is to ride. I’d ridden to the launch on my Africa Twin called, ‘Murray,’ which is so new it still has the stock Trailwings fitted, so riding on cream doughnuts would have been an improvement.

THE CREW TRY THE KAROO

On the morning of day one, we were greeted by a fleet of bikes of all shapes and sizes, shod with Karoo 4 for us to try. To have everything from Husqvarna Nordens to a Harley Davidson Pan America, BMWs and Ducatis to choose from meant we’d get a feel for the tyre on bikes that feel very different from each other.

It’s a very unusual approach from Metzeler that gave an early hint at the confidence they have in their product.

It was wet and cold. This came as no surprise given we are living through the great and never ending soaking event of 2022.

I chose to start the day on a KTM 1290 Adventure, and we headed out following the lead of the BMW Safari crew of Shane Booth, Chris Urquhart and Miles Davis in search of some dirt.

The first thing I noticed about the Karoo 4 was how quiet they are on the road. I’ve recently spent some time on more aggressive Motoz knobby tyres and the difference is night and day which is a big deal for a lot of riders.

After a short road section, we hit the dirt which was moistened from overnight rain… a shocker I know.
The tracks we rode were in good condition but had that sheen of dolphin snot across the top in a lot of places. After showing the requisite amount of caution it became clear that the Karoo 4 was not at all challenged in the conditions.

Where I expected sharp redirections from the front wheel in thicker slop, it held its line predictably every time.
And most surprising to me was the impressive grip level from the rear under heavy acceleration when you’re sitting up straight. The Karoo 4 grabs the trail like the dirt owes it money and tracks straight even with a liberal dump of the 180Hp on offer from the KTM.

Under braking, the front end is mighty impressive both off and on the road. I purposely grabbed a handful a few times and everything came to a halt really quick, which is something a more aggressive knobby often struggles to achieve particularly on the road.

At a point in the day, I swapped the bike over to an R 1250 GS, something that shares a wheel size with the KTM but is completely different in every other way.

I haven’t ridden a BMW in three years, and they do take a bit of getting used to. The front end feels foreign at first, cornering feels so separate from what I just experienced on the KTM and I’m more inclined to sit down on the German than I am on the Austrian.

But with all that, I found the Karoo 4 to be as confidence-inspiring on the BMW as I did on the Kato.
Again, those moments where the slop reaches a critical mass and you grit your teeth expecting things to get loose, the Metzelers hold it together nicely and not only can you pass through with little fuss, but you can keep accelerating all the way.

In several sections, the rear tyre grabbed so completely that it took more throttle than I anticipated to break it into a slide. That’s a pretty weird sensation when the track is wet.

When it comes to the most basic of expectations from a tyre, namely overall grip, the Karoo 4 is an outstanding tyre.

When it comes to wearing it’s a little harder to quote accurate figures because we all ride differing bikes, tracks and have varied styles and experience.

Metzeler claims the wear rate is slightly improved over the Karoo 3, but the quality of grip as the tyre wears is now superior.

I was so impressed with the Karoo 4, I will be fitting a set to Murray and will be able to give a decent wear report in good time. I will say one thing on this though…at the point you need maximum grip so as to not befall a horrible fate, I’d happily give up some range to ride on a tyre offering more traction.

The Karoo 4s are seriously good on the road which is often an underappreciated aspect of a knobby tyre, with little noise and a largely neutral roll characteristic to cap off the remarkable grip.

We do all spend a lot of time on the blacktop and the Metzelers felt planted in the twisties and quiet on the open road.

Off-road they shine and in all honesty, it took me a while to get my head around how much traction I had to play with across two very different bikes. If you’re a Karoo 3 fan, you’ll love the 4. If you’re new to Metzeler then there is no better time to dive in and get cosy with some German rubber.