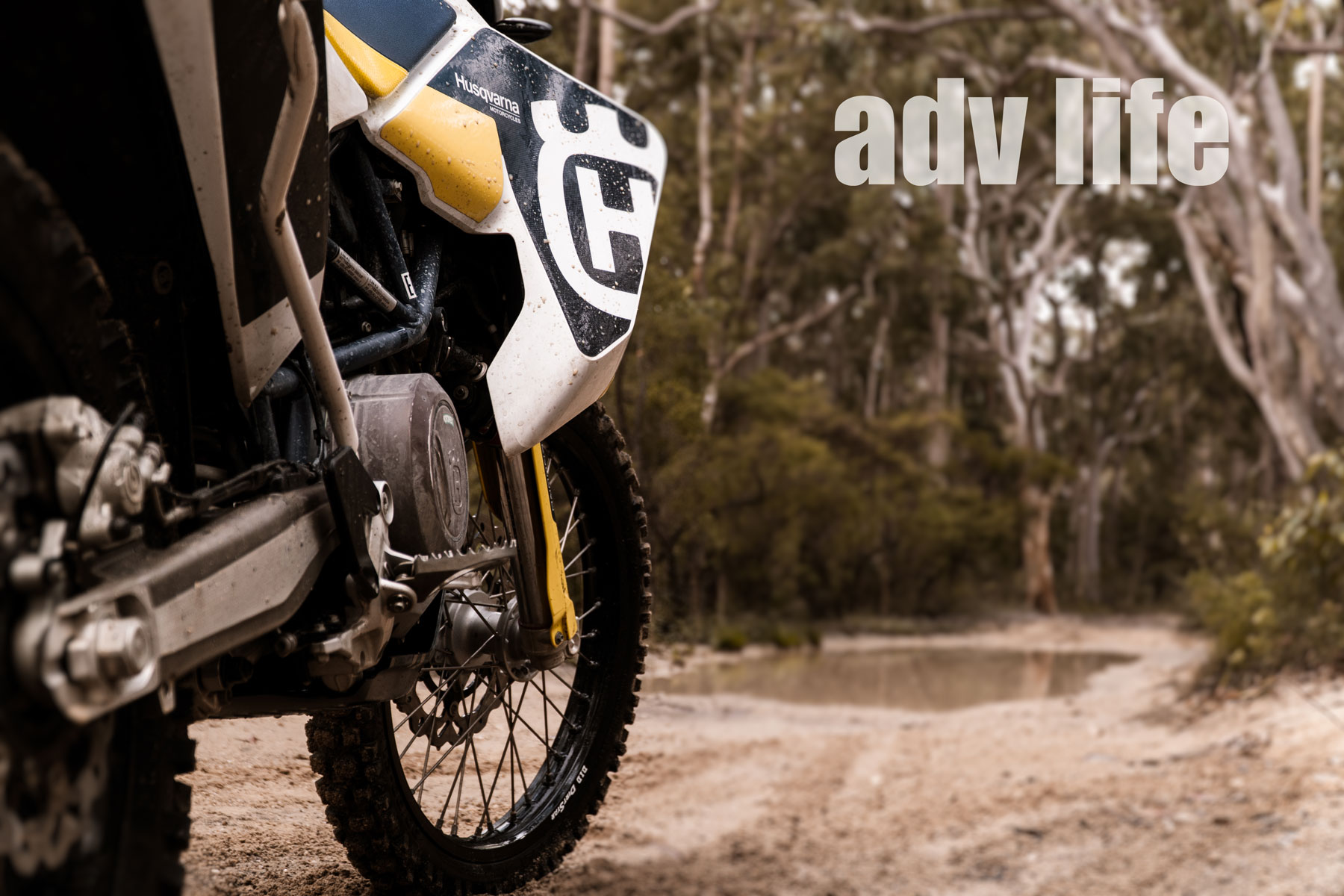 The hybrid of enduro and adventure is a formula long wished for but seldom delivered as well as with the Husqvarna 701 Enduro LR.

Fuel range is an integral part of the adventure bike puzzle. If you don’t have it, you need to carry it. Or hope that the one servo at Finke didn’t run out of fuel, leaving you with a nervous 150 kilometre run to the Kulgera Roadhouse.

It’s ultimately best to have all the fuel you need in the best place for it; in the fuel tank.

Fuel range has always been the missing piece of the puzzle for the Husqvarna 701 Enduro. For a rider looking for a long-distance machine with as close to a dirtbike feel as possible, the 701 Enduro stands tall as an outstanding option.

It’s comfortable for long days, has a silky-smooth single-cylinder engine that’s not overly aggressive. Compared to something like the Ténéré 700 or 790 Adventure R it’s so much lighter that such a comparison isn’t even fair and side-by-side with a DR650 it’s better looking, clearly more modern, more powerful and has far, far better suspension, (it also costs A LOT more than a DR650).

The 701 Enduro is all these things but it fell short on fuel range. The single 13-litre fuel tank just wasn’t enough to make those dodgy stretches comfortable without carrying extra fuel.

If you rode aggressively or hit soft terrain, then the range anxiety intensified.

Husqvarna responded by releasing, initially in Australia only, the 701 Enduro LR. LR standing for Long Range thanks to the addition of a forward tank gifting the bike 12 more litres and taking the total to 25; near double the previous capacity.

The single greatest limiting factor has been henceforth been expunged and the 701 is free to roam wider than ever before.

The new tank is certainly unmissable and is reminiscent of the low-slung version on the 790 and now 890 Adventure, carrying its weight low to improve weight distribution.

The rear filler cap is, however, nestled between the rear luggage rack rails which makes it a pain in the arse if you need to fuel up and you’re carrying a load that then needs to be shifted at best, or removed at worst and then repacked so you can ride-off.

The two tanks operate independently, with two filler caps and two pumps that need to be activated via a switch on the ‘bars when that tank is required.

A fuel gauge would be nice here, but instead, it’s a fuel warning light and the old-fashioned peek inside. It’s not the most elegant system but it works.

“The new tank is certainly unmissable and is reminiscent of the low-slung version on the 790 and now 890 Adventure, carrying its weight low to improve weight distribution.”

Anyone from a dirtbike background would be forgiven for thinking the 701 would be an animal.

Certainly, anyone that’s ridden a modern FE 450 or 500 might be under the impression that more CCs equate to more mumbo and we certainly don’t need more than what’s on already offer in the enduro bike ranks.

But thankfully the Husky engineers aren’t motivated by a lust for power. They know a bike designed to be ridden all day can’t spend large portions of that day trying to take off like a stabbed rat.

They’ve also done some magic with the vibrations, (that sentence could have been spoken at any point today in Byron Bay). It’s a single-cylinder engine, which to some is as offensive as a bacon burka, but it doesn’t vibrate like a single.

In fact, there’s a barely perceptible tight tingle and that’s about it until you reach highway speeds and then the knobby tires play their part.

And this engine is not all that aggressive, instead concentrating on getting power to the ground and keeping it there. Traction is your friend and the 701 is all about keeping you hooked up as opposed to spinning your beanie.

It can lift the front without a problem and bolt when you urge, but it isn’t an angry, fatiguing delivery.

The engine note is a bit anaemic but it’s quiet and that’s a positive these days. The optional Akrapovic pipe certainly sounds better and saves weight so it’s a definite consideration when you’re fitting out the new stead on the dealer’s floor.

First gear is incredibly low so second gear starts became the norm in our time with the bike.

The Easy-Shift system was appreciated. It has some moments of obstinance in the higher gears, but I’d fit it to the bike if it were to find a home in my shed.

The Brembo brakes are great as we have come to expect, although the (switchable) ABS is a bit too aggressive at the rear and as a consequence, I turned it off whenever I hit the dirt.
The 48mm WP forks have been improved over previous models and it shows.

The LR obviously carries more weight up front than the standard model and dives when fully fuelled, but it is well sprung and balanced once the load evens a little more.

Use the front tank first to alleviate the issue with haste. In the tight tracks, it’s an absolute blast to ride. There isn’t really another bike outside of the enduro category that feels like the 701 does on trails that you’d expect to find a 450 on.

Because of the low-slung weight, it changes direction quickly and steers positively and as the power is so linear it’s easy to bring the back around when needed without worrying it will let go. The gear ratios make a selection between second and third a chore in the tight trails, but the bike really is at home on flowing double trails and anything wider from thereon.

It is so much fun to hammer along on the 701 with a load of fuel and a heap of luggage, just like you would on any other adventure bike – except way faster through less effort and with more confidence.

Of course, adventure riding isn’t all about speed, until it is. If that is what blows your hair back, then give it all you’ve got.

“It is so much fun to hammer along on the 701 with a load of fuel and a heap of luggage, just like you would on any other adventure bike – except way faster through less effort and with more confidence.”

IS IT RIGHT FOR YOU?

There is no windscreen. No TFT display and no heated handgrips or cruise control. It embraces the incivility of the dirtbike while gifting it the range and comfort of an adventure bike.

If you can’t live without a windscreen then you can get an aftermarket bolt-on and heated handgrips are easy to find and fit. Cruise control only stands out in omission because this bike is relatively expensive.

At $18,345 + ORC, I reckon heated grips are expected and cruise control appreciated, and I can hear DR650 diehards screaming at the screen right now about value for money. But this bike is just so unique in not only the physical package but the way it rides that it’s hard to form a direct comparison to any other model.

At that price, you may wonder if you should buy a Tenere 700, but if you want to go hard in tough conditions then the 701 is an easier bike to ride in stock trim. If you only ride more sedate stuff where ultimate comfort outweighs performance, then the 701 probably isn’t the best choice.

If you want to check a quality range of aftermarket bolt-ons, we’ve covered that in a separate feature so click here.

Riders have begged for this type of bike for years. Something light and easy to manage on the trails but able to run for days away from home.

And here it is. An enduro/adventure hybrid that, with the new larger tank has tipped more to the adventure side and found a true purpose.

The sad news is that, since writing this original piece, the LR has been discontinued. The tank can be bought separately, but the clever package we see here is no longer available. Bummer. This is a great stock build for the Husky Trek rides and it feels like HUsky nailed a brilliant and much-needed formula that we’ve lost because Euro riders perhaps don’t get it.