TRIUMPH SIGNS CHAMPS AND PLANS TO GET SUPER DIRTY 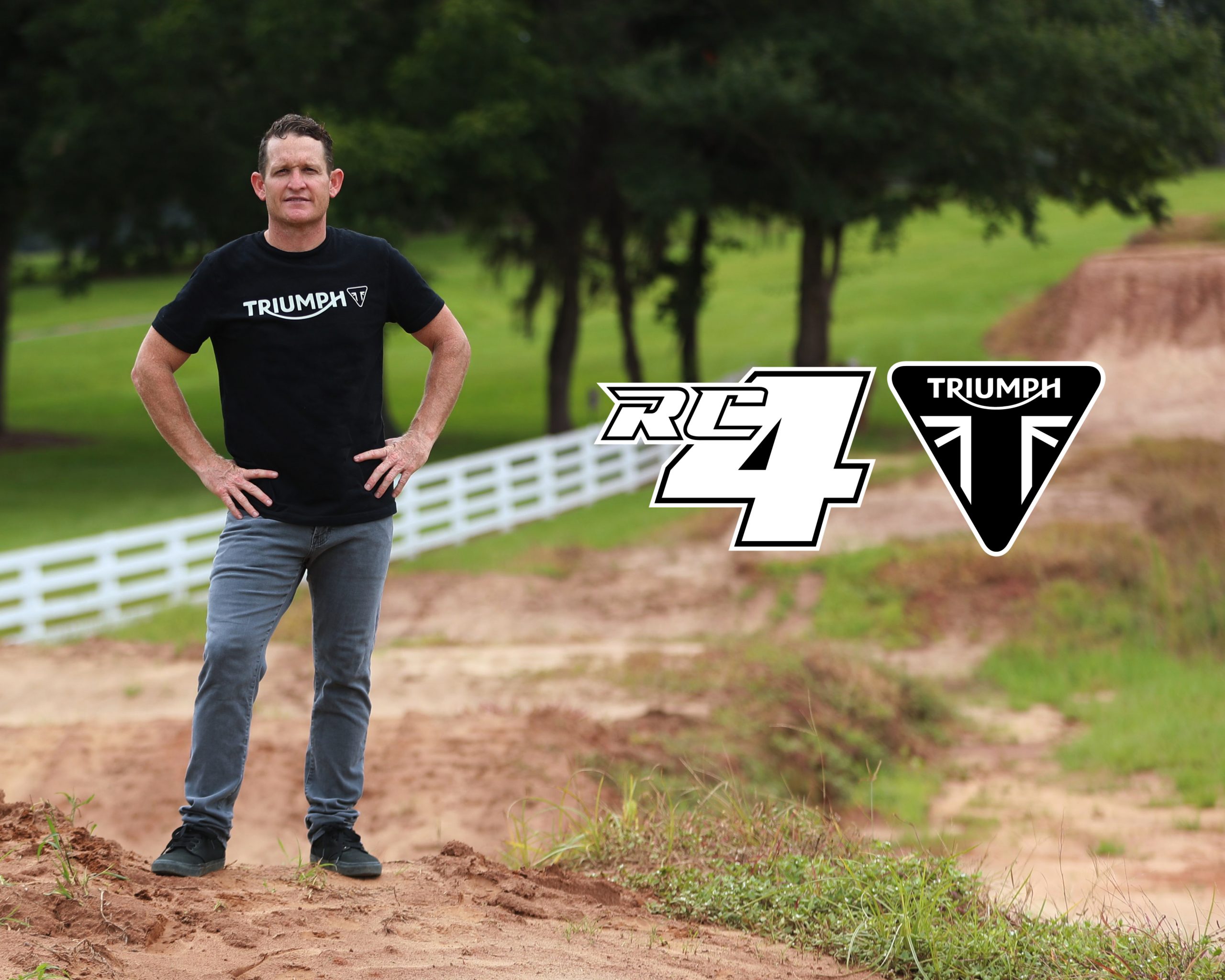 Triumphs takes a radical turn to chase after racing glory. But who is building the bikes?

In 2020 the greatest motocross rider of all time but long since retired, Ricky Carmichael, parted ways with Suzuki after a 15-year relationship. RC then started posting photos on his social media riding adventure on a Triumph Tiger. It seemed an odd fit to go from a motocross bike straight to an adventure brand but it’s clear now that something else pretty damn big was in the works.

Triumph has now released the master plan and you have to hand it to them, it’s pretty audacious. The company has not only welcomed Ricky Carmichael onboard but also the five-time Enduro World Champion, Iván Cervantes, to help develop a range of motocross and enduro bikes and to put together a comprehensive racing program across both disciplines.

That’s a huge task and one that most Japanese manufacturers have shied away from, preferring instead to focus largely on motocross and handing the enduro segment to a hungry KTM Group to devour.

As a side note, it’s worth pointing out that the great Jeff Stanton, Six times AMA motocross/Supercross champion has also done a deal with Triumph to run adventure rides in his home state of Michigan.

“Today’s announcement marks the beginning of a new chapter for the Triumph brand, which everyone at Triumph is incredibly excited to be part of. We are 100 per cent committed to making a long-lasting impact in this highly competitive and demanding world, with a single-minded ambition to deliver a winning motorcycle line-up for a whole new generation of Triumph riders.”

“Triumph has a rich heritage in off-road motorcycling that harks right back to its roots.
The confirmation that this beloved British brand is entering the off-road market is hugely
exciting for Triumph enthusiasts across Australia and, through our network of passionate
dealers, we look forward to welcoming them. This is going to be huge.”

There are many questions to be answered from this announcement, such as timeframe, capacities, will there be two-strokes, model availability and so on, but of most interest will be whether this is a tech sharing deal with another manufacturer. Let’s say…Suzuki for example.

RC has obviously had a long working relationship with the company. They would love a great off-road adventure platform to work with like the Tiger, but it seems they don’t have the budget/inclination to develop it alone. Their motocross range is not setting the world on fire even though the bikes are quite good, so a deal like this could help inject some funds into R&D and Triumph wouldn’t have to start from scratch moulding a motocrosser.

Suzuki doesn’t have a modern enduro bike though so this scenario might be a possibility but with a different manufacturer. Maybe Beta is a good fit? They have both motocross and enduro models and could always use some more funding and Ivan Cervantes has been on Betas for some time now.

Or is Triumph backing itself and going at it from the ground up? That’s a big job and one that would put them significantly behind the curve. Triumph is saying it will go racing straight away which suggests this is a new bike but ‘borrowed’ tech already tried and tested to a degree.

Will they be able to sell motocross and enduro bikes from a traditional Triumph showroom? It’s unlikely the two customer bases will mix, as BMW found out when they tried to sell Husqvarnas.
So many questions and only time will tell.

“I’m thrilled to announce that I’m joining the Triumph family and even more excited to be a part of their new endeavour into the off-road product category.

This is an incredible opportunity for me to join this historic brand, and I’m honoured and humbled to be a part of the development and release of Triumph’s off-road motorcycles. Building something from the ground up is something that really is intriguing to me at this stage of my career.

What is impressive to me is Triumph’s dedication and passion to develop a top-of-the-class product. Everyone who I have been involved within this project, from the engineers, design groups, R&D department, has shown extreme passion for what they’re doing, and that’s a recipe for success and something that I love being a part of.
We all share that same passion, and that’s to be the best.

If you’re familiar with the Triumph brand, you already know the quality of craftsmanship is top-shelf, and the off-road models will follow suit to their past!

Not only are these exciting times for me, but it’s an exciting time for the off-road industry to be adding another brand to the mix and the opportunities that lie ahead for all off-road consumers. I can’t wait to see the reactions when these models hit the dealer’s showroom floors.”

“I’ve loved Triumph motorcycles since I was a small kid, seeing them in films and on television. So to be working with Triumph from the beginning of this project is an amazing opportunity for me – not just because it’s working with one of the world’s greatest motorcycle brands, but also for being part of building something from zero. It’s a dream come true for any racer!

Like me, everyone I’m working with at Triumph is focused to make the bikes the best they can be. I cannot wait to see the bikes competing at a world level, but I also look forward to when I can stand in a Triumph dealer and know I was part of this very special project.”