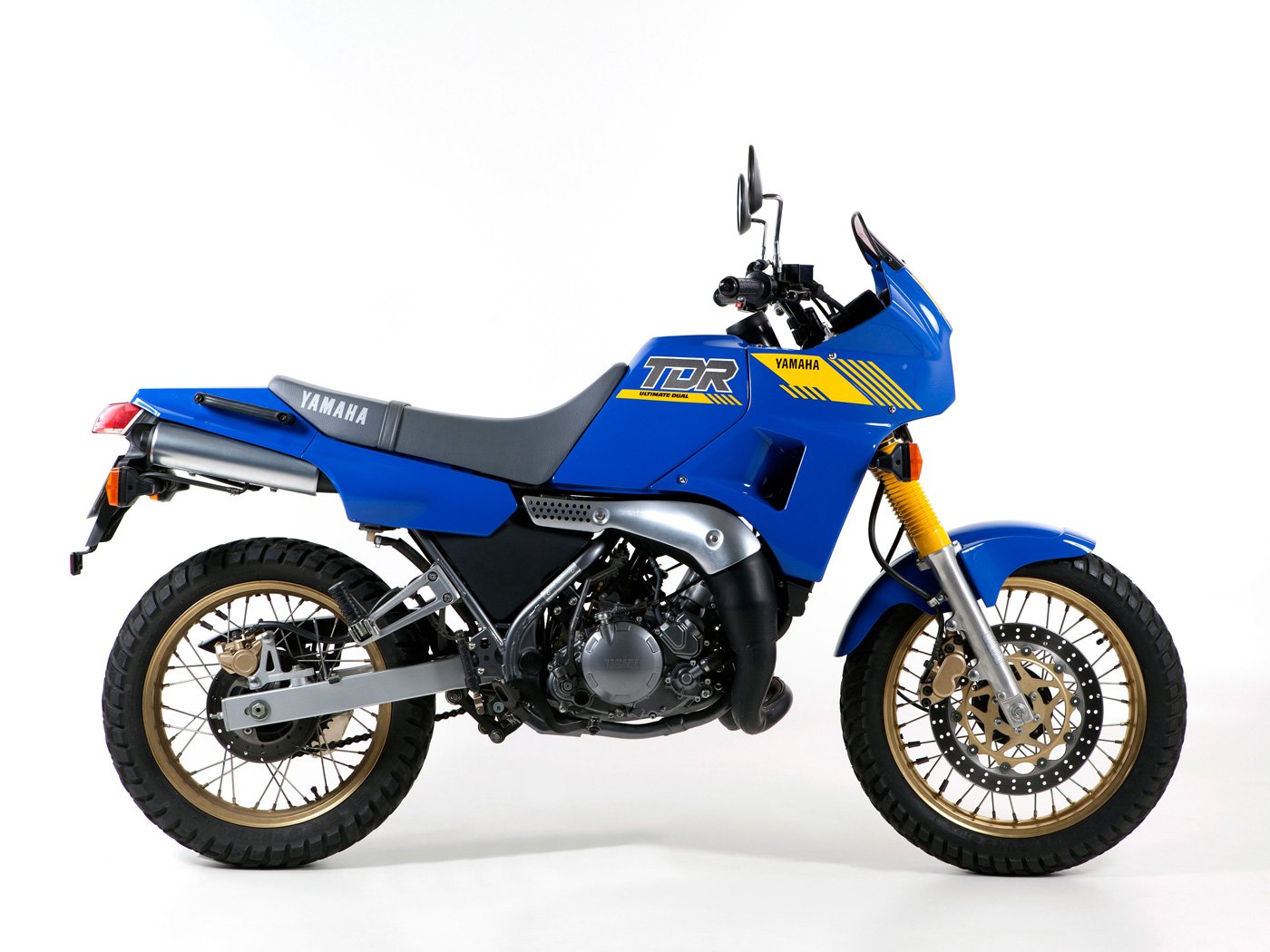 Yamaha and Honda have both dabbled with the two-stroke adventure concept in the past using two vastly different approaches.

The two-stroke is, sadly, in the later stages of its existence. Where it once ruled the tracks and trails under all manufacturer’s flags, nowadays the only major companies interested in producing dingers are KTM, Husqvarna, GasGas and Sherco. And three of those are of course the same company. Long gone are the ITs and DTs, the RMX and KDX and Yamaha Japan refuses to allow the YZ250FX, the last Japanese two-stroke enduro bike, to be registered in Australia.

A few years ago while testing the second-gen TPI Husqvarnas in Finland, I was told by a company rep that even with the new injection tech, two-strokes won’t be able to stay on the good side of the Euro emissions laws for many more years. The end is nigh. And, as an avid two-stroke fan, I find this distressing and sad. It may all be in a brave effort to save the Banded Naked Mole Rat, but if only that rat knew the joys of hitting the sweet spot on a 300, surely they would adjust their way of life to accommodate the changing climate so that we might continue to hit band.

JAPAN TURNS ON THE DINGER

Japan once embraced the two-stroke and in fact, it refined it and dominated the world with it on road and dirt. Then Honda called time on the oil burner and Kawasaki and Suzuki followed suit. Yamaha is the last hold-out with its YZ range which, while the 250 and 125 have been largely unchanged for two decades, is still relevant and a hell of a lot of fun today.

But there was a time when they even had a run at two-stroke adventure models. Light and blessed with simple mechanics, the concept has its merits but never gained momentum – although Honda almost redefined the two-stroke some years ago with a concept they fairly quickly killed off and never revisited. Let’s have a look at what could have been embryonic examples of two-stroke adventure models that never evolved past the moto-amoeba stage.

Back in 1988, while we were lining up for hours at the Brisbane World Expo to ride the monorail, Yamaha released a two-stroke dual sportbike called the TDR250. The TDR would go on sale in New Zealand but not in Oz and it featured a liquid-cooled, parallel-twin YPVS (Yamaha Power Valve System), engine ripped straight out of the TZR250 road bike which itself became something of a legend and still looks stunningly good to this day. Along with the engine, the gearbox and electrical components were interchangeable with the TZR and the R1-Z roadies.

A change to the porting and lower compression were compromises designed to make the engine more compliant and less fuel-hungry and the styling was intended to invoke images of the Dakar, which it sadly fell well short of. It looks more like a 1989 DT200R with swollen glands. When compared to a 1988 Tenere or Africa Twin it is hard to argue this is an even vaguely attractive motorcycle. The dual pipes were something of a redeeming factor though, low slung and prone to damage though they were.

The wheelset was 18-inch front and 17-inch rear and the suspension travel was a mild 160mm at the front and 150 at the Mono Cross rear set-up. It did have a rear disc brake which was kind of a big deal in 1988, but no electric start so prime that right leg for some kicking. The whole package weighed in at 137 kilograms, which to put in perspective is 15 kilos lighter than a current model Honda CRF300 Rally. The French loved it, but nobody else really did and Yamaha didn’t push it all that hard. As a consequence, the model lived a short life and the idea, as early as it was, of a dual-sport/adventure two-stroke with true styling never took flight.

Ultimately, the TDR was more of a road bike with adventure makeup on and there were a number of better options available at the time so it couldn’t gain traction against the likes of the Tenere, Africa Twin, Cagiva Elefant or Suzuki’s DR750S BIG. There is a scintilla of coolness and mystique about the TDR250 though.

The idea of a two-stroke adventure bike based on a modern TPI 300 would be intriguing although a TPI 500 would be even better. Check out the video below for a walk-around and sound check on a pristine TDR.

Every now and then Honda drops a bike out of the blue that redefines a category. It straight-up blows everything away and sets the trajectory all others follow for years to come. One of the best off-road examples is the original 1974 Elsinore CR125M that began the route of the European models on motocross tracks around the globe which then lasted for decades and severely depleted the Euro manufacturers ranks to the point where there is but one major manufacturer, KTM, competing at the highest level now.

THE EXP-2 TAKES THE STAGE

Interestingly, Soichiro Honda (that’s Mr Honda to you and me), was dead against two-strokes, famously declaring in the 60’s that Honda will never build one. Well, they went on to build some absolute ball-tearers. But one model, in particular, came just before the validity of the two-stroke was to be called into question. It had the potential to breathe life into a category that was soon to meet its doom in the 1998 Yamaha YZ400F; the bike that killed the off-road two-stroke.

In 1995, Honda entered the Granada Dakar Rally on a bike they called the EXP-2. Like nothing else seen before, the EXP-2 was a clean-burning 400cc two-stroke that employed an Advanced Radical Combustion (ARC) system to burn off fuel that would otherwise be ejected out the pipe on a normal two-stroke. A large power valve would lock off 90 per cent of the exhaust port increasing pressure in the cylinder to the point of producing combustion.
It’s not quite dieseling but it’s not totally removed from it. At idle and high revs ignition is the domain of the spark plug, but from idle to about half-throttle ARC activates and carbon monoxide and carbon dioxide emissions were measured to be 15 per cent lower, hydrocarbons were down 80 per cent and Nitrous Oxide emissions were down a claimed 90 per cent. All controlled by a one-of-a-kind CPU in what was an insanely expansive motorcycle (some figures suggest $250,000 US per bike). It put out around 54 horsepower which was 20 less than the NXR780 four-stroke, but it weighed about 60 kilos less which is utterly mind-boggling and offered better fuel consumption.

OK, POINT MADE. WHAT NOW?

Few were made but Honda wasn’t shy about putting them into battle. It won its class in the Granada-Dakar Rally and scored fifth overall. It won the two-stroke class in the Nevada Rally and also the Baja 1000. It proved the concept was viable but shifting from expensive Works race bike to production model is a huge leap and Californian environmental laws were aiming its guns for the two-stroke. The future may have been bright, but it may also have been short and so Honda chose not to take the chance and never put it into production. They did however produce the CRM250 AR trail bike which used ARC, but that is a story for another day. Ultimately, Yamaha’s YZ400F appeared and took all the manufacturers by surprise. Honda knew it had work to do to catch up and all focus turned to four-stroke development. The EXP-2 was a marvellous piece of engineering that just didn’t have a path forward but will remain one of the great concepts that could have been.

Excuse the French and persist to hear the bike on-song