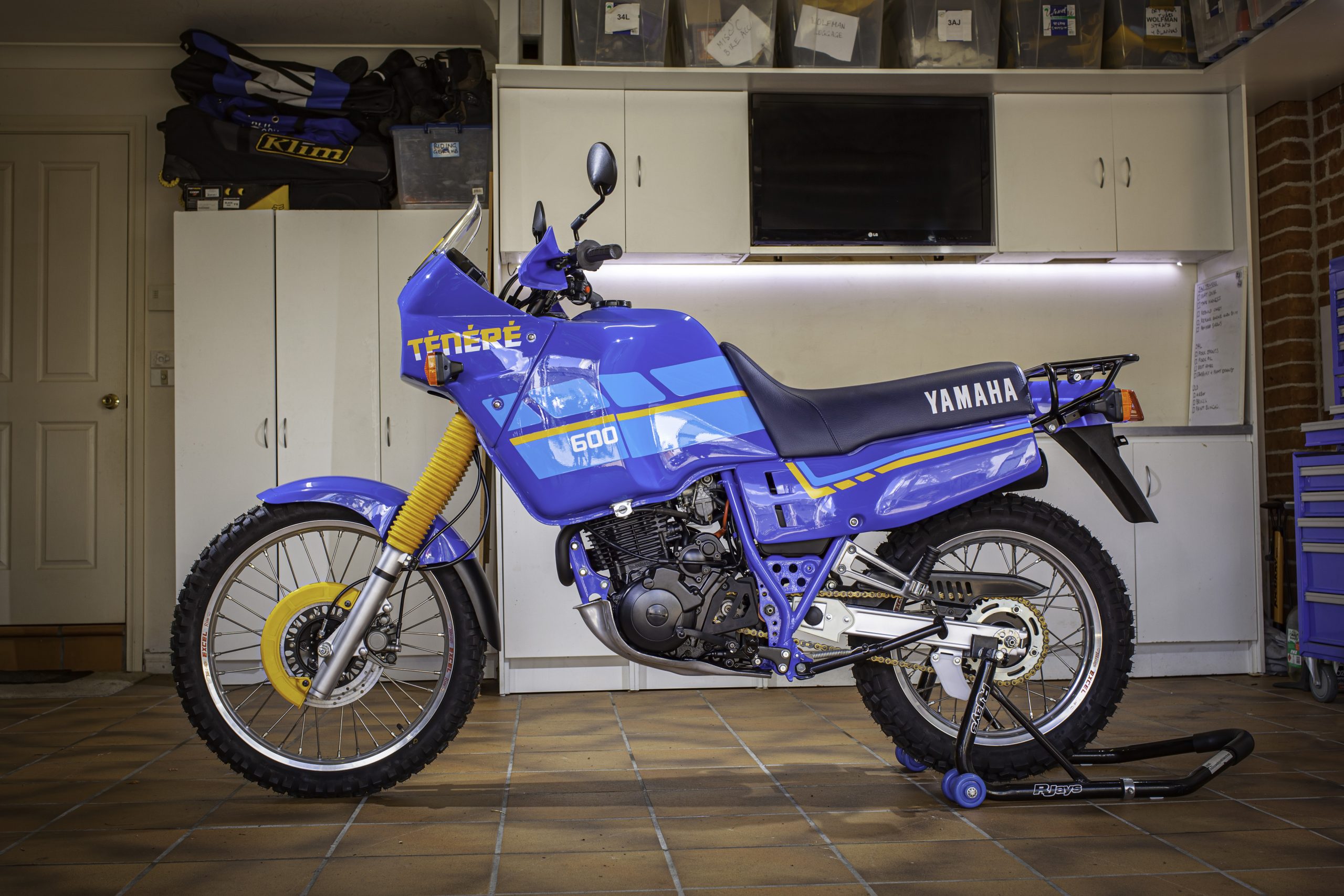 Restoring a fabled Tenere can take years of painstaking work, but take a look at what happens when you're driven by a serious passion

Lance Turnley has six Yamaha Teneres. That may be a record, even for someone who once worked for Yamaha. Lance buys these bikes for several reasons. First, he’s a Tenere connoisseur and as such it is incumbent on him to own as many as possible.

Second, he has the hots for the rarest Tenere of all, the 1988 3AJ, and when he sees one “will ask the owner what he wants for it”, no matter if the owner is in Brazil, Burundi or gaol.

And finally, when you have six Teneres on the go you need a lot of parts to keep them all happy, even if some of the bikes you buy are donors and won’t be ridden far or even at all. Lance will buy a ratty old Tenere because it has a part (or parts) he hasn’t been able to find during his constant excavations on eBay.

The man is careful when it comes to keeping track of what he’s purchased, and for which bikes because he knows from experience that things quickly turn to mud if you have parts all over the place and none has any identification. He records every purchase, photographs it, stores it carefully, and labels it with a number corresponding to the relevant page in the parts manual. That’s how you do it when you know what you’re doing.

Parts commonality among Teneres is high, about 90 percent, but for some difficult-to-find squiggly bits no longer made by Yamaha, like an original brake hose or a sticker, Lance might have to excavate for months until one turns up, here or in a foreign country. But that’s the beauty of eBay; as long as the bloke on the other end of the e-thing is honest, you can get whatever you need, wherever it is.

As you can see, Lance Turnley, former jetski racer, watercraft publisher and now Tenere connoisseur, has turned over a lot of stuff on eBay, which for him, he assures me, has always been reliable. He obviously knows a beautiful bike when he sees one, he has ‘the eye’, but not all the bikes Lance brings home are pieces of art. Some are a bit daggy.

The rare, 1988 3AJ you see here looks beautiful now but cost a mere 900 bucks and when Lance found it was drop-dead ratty. And it had what social commentators liked to call a chequered history. The previous owner had yanked out the original engine and replaced it with a XT550 motor.

Okay, so that mean the parts numbers didn’t line up as they should, but it turned out that the guy still had the 3AJ motor so Lance bought that as well. And, as I understand it, that’s more or less how things go in the resto business. One minute you don’t have the parts and the next minute you have too many. But there it was: Bingo!; an ’88 project bike.

And an important one. The 3AJ was the first Tenere to get twin headlights, a rear disc brake and electric start. It was Yamaha’s version of the Honda Africa Twin, and would follow a similar design trajectory. It was also the basic platform with which the superhuman Frenchman Stephane Peterhansel ruled Dakar, with wins in 1991, ’92, ’93, ’95, ‘97 and ’98. (In 1999 he switched to cars and was soon flogging everyone again.)

A lot of the restorative mechanical work on this Tenere was of course outsourced. For example, Simon Thomas (The Bikesmith, Blacktown) rebuilt the original motor from the crank up, while Lance continued looking for original parts, some so arcane they would matter only to someone with his specific model knowledge and respect for detail.

The wheels were rebuilt by St George Wheel Works (Sydney). It took three years excavating on eBay to find an original instrument shroud. When I photographed this bike it had a muffler from an earlier model XT600 and Lance was still looking for an original.

He might still be looking. But it won’t be long before this machine is itself registered and ready to roll. That it’s described as “still a work in progress” is difficult to believe.

One day Lance bought a black Tenere. “It was a bit ratty too”, he says, “but I fixed the brakes, did a few other things to make it roadworthy and then registered it.”

That went alright, and this bike was headed for a resto of its own, but then Lance turned up a 1989 XTZ750 Super Tenere, and after that the whole circus did a U-turn. The idea of rebuilding the first purchase was shelved, for a while anyway, and the XTZ started getting more Lance Love than did the big black bastard.

This was to be expected. Renovating old bikes doesn’t always follow a linear path and, as I’ve already explained, priorities can change as more machines are unearthed from dusty sheds and garages and returned to the light.

Lance says the Super Tenere too is a work in progress. It’s still running the original motor but is reliable enough for Lance to have ridden it in a Tenere Tragics event. “It was a bit of a handful in that situation,” he remembers, “but still a nice bike to ride.” (I sympathise: I once took my V-Strom 650, wearing worn Trail Wing rubber, on a country ride in the Hunter Valley. When we hit a kilometre of wet clay I spent an hour smashing my face into the ground).

In any event, Lance believes that keeping these bikes active is important if you expect them to last. They don’t take kindly to a sedentary life in a garage where moisture can find its way into the moving parts you spent so much time and money accumulating.

As I remember it, the Belgarda was not a pretty thing, and wouldn’t have been even with an Ohlins fork, but what the hell? If you can mix and match as Lance can, after reviving a few truly legendary motorcycles, coming up with your own hybrid would seem the next logical step.

For a step-bystep walk thrugh on how the Tenere came to be, read the story as Yamaha itself remebers it here.

If you, like us, have a love for the orignial heros of the adventure bike world, check out our look at an immaculate 1988 Honda Africa Twin.